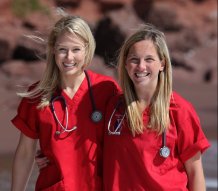 Dubbed the ‘EmergenSea Girls’ they are planning to use the rowing challenge to study the effects that this kind of intense endurance event will have on their mind and body.

Two Exeter doctors will row for 24 hours in the first phase of preparation for an epic 3,000 mile world record bid across the Atlantic,  during which they will research why women excel in endurance sports.

The two University of Exeter Extreme Medicine masters students, Royal Devon & Exeter Hospital doctors Charlie and Rosie plan to compare the physiology and psychology of male and female participants in ultra endurance events, in light of emerging evidence that women outperform men over the most extreme distances.

Dubbed the ‘EmergenSea Girls’ they are planning to use the rowing challenge to study the effects that this kind of intense endurance event will have on their mind and body.

Now, they will start their preparation by taking on a 24-hour row on rowing machines as they ramp up both fitness and fundraising. The challenge will take place in the RILD building on the RD&E site from Wednesday March 4 to Thursday March 5 – despite Charlie still walking with a crutch after a major pelvic surgery for hip dysplasia to alleviate pain she suffered when walking.

Charlie, 30, originally from Windsor said: “Most teams start training a year and a half ahead of the challenge, building both their strength and endurance. The operation has been a bit of a set back and recovery is slow. I am still on crutches 18 weeks down the line and itching to get training but should probably try walking unaided first! At least this process has been a good practice of mental resilience and I have learnt a lot that will improve my clinical care by being the patient for a change”

Rosie, 28, originally from New Zealand said: “We’re both really excited to both to push for a record during the challenge, and to research the effects of this kind of extreme activity on women. Initial research has suggested that women may have greater potential in ultra-endurance events than men. There are so many inspiring stories about women achieving incredible sporting feats.  We’re completely awed by long distance swimmer Sara Thomas who swam the channel four times back-to-back, and Jasmine Paris, who broke the record for the 268-mile Montane Spine Race along the Pennine Way in January while still expressing milk to feed her daughter.”

The pair has recently returned from La Gomera in Spain, where they were undertaking some preliminary research, testing this year’s competitors’ body composition and muscle fatigability via grip strength, which they will test again at the end of the challenge. Charlie and Rosie have also asked them to complete a psychological questionnaire daily. Amongst the 2019 participants is recent University of Exeter graduate and alumni Bird Watts, who is taking part with her mum and friends.

“We aim to be back to training as a team in March and I’m keen to push on for December.”

Fuelled on coffee, each other’s infectious motivation and the excitement of seeing their boat for the first time, the team are ready to train together again with the row fast approaching.

The challenge starts on La Gomera, the second smallest of the Canary Islands and finishes in the West Indies on the island of Antigua. The challenge will be the equivalent of rowing the distance between Exeter to London more than 18 times.

Charlie and Rosie set sail on Friday 11th December 2020 and are hoping to break the current female record and complete the challenge in just seven weeks and raise significant funds for Devon Air Ambulance.