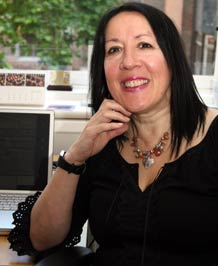 Professor Janice Kay, Provost and Senior Deputy Vice-Chancellor of the University of Exeter, has been appointed to the high-level Teaching Excellence Framework (TEF) panel.

Professor Kay has been chosen as one of a highly select group of leading UK academics to sit on the influential panel, appointed by the Higher Education Funding Council for England (HEFCE).

More than 1,200 applications were received for the roles available on the panel, which also includes students, employers and widening participation experts from a wide range of different organisations.

The Teaching Excellence Framework is being introduced by the Government to recognise and reward excellent learning and teaching. HEFCE have been asked by the Government to implement Year Two of this exercise. The new TEF panel will be responsible for deciding the assessment outcomes based on recommendations and advice from a wider pool of academic and student assessors, who will be appointed later this month.

Speaking on her appointment, Professor Kay said: “I am honoured and delighted to have been appointed to this crucially important panel. Our universities rightly enjoy an excellent reputation on the global stage, and it is vital that the Higher Education sector continues to evolve to meet the changing demands and expectations towards excellence in learning and teaching. This panel will draw on a vast array of expertise, innovation and knowledge to significantly contribute and support the TEF in the years to come.”

Further appointments will be made to the panel to strengthen representation from employers, and also from Scotland, Wales and Northern Ireland, should they take part.

The list of appointed assessors will be announced by the end of September. The Department for Education will announce the final specification against which providers are to be assessed later this month, following its technical consultation.

Professor Chris Husbands, Chair of the TEF, said: “I am sincerely looking forward to working with this panel, which is drawn so broadly from across the sector, to build on the excellent reputation of UK higher education at this important point in its evolution. The panel will bring to bear a range of perspectives and expertise to contribute to the robust and successful implementation of the TEF.”

Commenting on the appointments, Madeleine Atkins, Chief Executive, HEFCE added: “‘We are delighted with the calibre of panel members, who we have appointed for their standing with higher education providers and students, and their significant commitment to excellence in learning and teaching.’

This is the latest high-profile appointment for Professor Kay on the national stage. Most recently, Professor Kay joined a high-level taskforce designed to address all forms of harassment on University campuses. The taskforce was established following a request by Jo Johnson MP, the then Minister of State for Universities and Science, in late 2015.