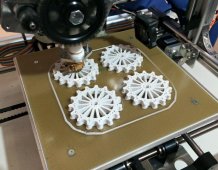 3D printer in action. Image by CuriosityII via Wikimedia Commons.

Dr Amber Griffiths has been interviewed for a BBC Radio 4 programme on the subject of 3D bio-printing.

Dr Griffiths, from the Environment and Sustainability Institute (ESI), was one of various academics from around the world who spoke about the technology’s possibilities as well as its current deployment in a range of research applications. These include an artificial reef ball in Australia, a printed birdfeeder in America and 3D guillemot eggs being used by Sheffield University in field research.

Dr Griffiths spoke about the ESI’s Unmanned Aerial Vehicle (UAV) facility, and how Leon DeBell and Dr Karen Anderson have used 3D printing to make custom attachments for their UAVs to hold sensors and cameras. Most recently, they made a holder for a smartphone so they could attach it to a kite, with a view to allowing people to do their own environmental monitoring.

She also talked about the technology’s unprecedented speed and low cost, which will help to make research more flexible, accessible and easier to undertake quickly without the burden of first having to raise prohibitive sums.

In describing her contribution to the programme, however, Dr Griffiths underlined what she believes to be 3D printing’s unique benefit as regards conservation and climate change: “3D printing offers an opportunity to make exactly what you need, where you need it, and you can re-melt the plastic to make something else after. Its ability to decentralise manufacturing while reducing consumption and shipping are what make this a potentially highly disruptive and revolutionary technology”.