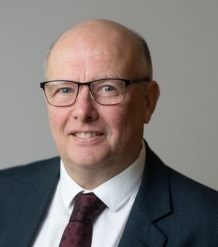 Dr Andrew Dean is Head of Regional Impact within IIB at the University of Exeter.

He is an experienced project manager,  bid-writer and  researcher and a specialist in the topics of employment, skills, labour market monitoring and impact.

The Marchmont Observatory, is a research centre dedicated to supporting real-world interventions in local and regional labour markets.

His main interests include: local and regional higher education impact, labour market and employment policies; the link between universities and 'place'; regional and local labour market monitoring; the role of social partners in employment and skills policy and, linking policy with practice.

He currently leads IIB activities related to the Future of Work.

Andrew has significant experience in managing complex multi-partner projects designing and carrying out pragmatic (mixed methodology) social science research and evaluations. In 2019/20 he led a major research project with Unison to explore union members skills needs and is the author and UK lead for the Escalate project which is examining future approaches to AI and digitalisation within Europe's HEIs. He recently managed the SPIDAS ERASMUS+ Strategic Partnership seeking to boost young people’s competences, and interests in, careers in data analytics and the VET-EDS ERASMUS+ SP transnational project seeking to align economic development strategy with VET policy in European regions. In 2018 he completed a piece of research for the British Council on Institutional Leadership in TVET Governance.

He also managed and delivered the University of Exeter elements of the International Project's Mid Life Skills Review (led by the TUC) and  Replayvet (led by Prospektiker, Bilbao). Andrew is the UK and Ireland expert for a major CEDEFOP project looking at real-time LMI and web vacancies with the University of Milan-Bicocca (2017 – 2020).

In 2017 Andrew co-authored the Jersey Skills Strategy and the Centre of Excellence Strategy and Roadmap for Digital Jersey. Also in 2017 he authored two reports for the OECD LEED Programme, one on the Greening of Energy Intensive Sectors and the other on the problems of delivering Apprenticeships to Hyper-Rural Geographies (Norway). Other recent projects include a number of bespoke pieces of analysis and impact support for Local Enterprise partnerships; writing a Handbook on Long Term Unemployment for the OECD. Andrew has done a number of pieces of work for the TUC (unionlearn) including Evaluations of the 2017 Union Learning Fund and supporting the ongoing Rainbow Years (mid-life skills review) project.

Now in his second career, Andrew trained initially to work as a scientist (earth sciences and environmental sciences) before switching to support the creation of a new labour market observatory – the Marchmont Observatory, in 1998. Since then he has worked as a labour market analyst, project manager and writer, increasingly specializing in research with social partners and in the field of VET. He recently created a Supplementary Fundraising Strategy and accompanying online course for unionlearn/TUC in the UK.

An international expert for the German Development Agency - Gesellschaft für Internationale Zusammenarbeit – for whom he has designed and delivered training courses, Andrew is the University of Exeter coordinator for the international network - EUniverCities (medium cities with research intensive universities). He has been Vice Chair of the Scientific Committees for the European Network on Regional Labour Market Monitoring since 2014 and has authored a number of pieces for the network’s anthology.

His main research interests include: local and regional Higher Education Impact, labour market and employment policies; the Future of Work; regional and local labour market monitoring; the role of social partners in employment and skills policy and, linking policy with practice.

Vice Chair of the Scientific Committees for the European Network on Regional Labour Market Monitoring since 2014.