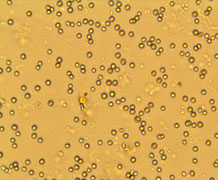 Globally, phytoplankton absorb as much carbon dioxide as tropical rainforests and so understanding the way they respond to a warming climate is crucial.

Phytoplankton subjected to warmed water initially failed to thrive but it took only 45 days, or 100 generations, for them to evolve tolerance to temperatures expected by the end of the century. With their newfound tolerance came an increase in the efficiency in which they were able to convert carbon dioxide into new biomass.

The results show that evolutionary responses in phytoplankton to warming can be rapid and might offset some of the predicted declines in the ability of aquatic ecosystems to absorb carbon dioxide as the planet warms.

Dan Padfield, a PhD student at the Environment and Sustainability Institute at the University of Exeter’s Penryn Campus in Cornwall, said: “Our findings suggest that evolution could play a key role in shaping how aquatic ecosystems respond to climate change. The phytoplankton in our study adapted to warmer water in the lab and evolved the ability to capture more atmospheric carbon dioxide.

“Our results demonstrate that evolutionary responses of phytoplankton to warming should be taken into account when developing models of how climate change will affect aquatic ecosystems. This experimental work provides the empirical basis for incorporating evolution into the models used to forecast future ocean productivity.”

The researchers exposed Chlorella vulgaris, a model species of phytoplankton, to temperatures of 20 – 33 degrees. Initially rates of growth peaked at 30 degrees, while 33 degrees was stressful and limited growth. After 100 generations (45 days) growth increased to levels expected from the exponential effects of temperature on physiological rates, showing that the algae had evolved the ability to thrive at the increased temperatures.

The underlying mechanism for the ability to tolerate warmer temperatures was an increase in the efficiency in which the alga was able to convert carbon dioxide into new biomass by reducing rates of respiration (production of carbon dioxide). It is this shift in the relative rates of respiration and photosynthesis that enabled the phytoplankton to cope with warmer temperatures.

While these experiments focused on a single species and strain of phytoplankton, the researchers believe that the rapid evolution of carbon-use efficiency will apply to other species of phytoplankton and substantially improve models describing ecological and biogeochemical effects of climate change.