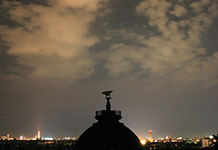 In natural areas clouds make the sky darker but in cities like Berlin (pictured) they make it far brighter. Photo credit: Christopher Kyba.

Artificial sky glow around the world has been quantified for the first time by researchers using a global network of sky quality monitors. The international team from Europe, North America, and Asia, which included researchers from the University of Exeter, found that nearly all the study sites were polluted by artificial light and that there were remarkably large variations in artificial night sky brightness across the world.

The study, published in Nature’s Scientific Reports, is the most comprehensive examination of sky glow ever undertaken.

Dr Thomas Davies, one of the authors of the paper, from the Environment and Sustainability Institute at the University of Exeter’s Penryn Campus in Cornwall said: “We found that in areas with high levels of artificial light, cloudy nights were actually brighter than clear nights because the light reflects off the base of the clouds.”

Light allows us to extend the day, increasing productivity. But the introduction of light into the nighttime environment is one of the most striking changes humans have made to the Earth’s physical environment, and it is associated with several unintended negative consequences. One example is skyglow, the artificial brightening of the night sky.

Until now, all published skyglow research had been local or regional in scale. The new study greatly expands on this earlier work, examining light patterns at 50 locations worldwide. Most of the study sites had considerable skyglow: at 30 of the study sites, the sky was more than twice as bright as a natural star-filled sky more than 95% of the time.

The study examined the effect that clouds have on the night sky brightness, and found that it varies remarkably, depending on the location. “Thick clouds act like a surface and scatter light back in the direction it came from” said study leader Dr. Christopher Kyba, study leader and former IGB researcher now based at the German Research Centre for Geosciences (GFZ). For millions of years, this made overcast nights the darkest, with starlight reflected back into space. However, this occurred at only 2 of the 22 sites where nearby meteorological observations were available. At most sites, the overcast nights were many times brighter than clear nights. The researchers were surprised to discover that the ratio between overcast and clear sky brightness grows most rapidly as cities are approached. Once the city limit is crossed, the rate of this increase appears to slow.

The brightest individual observation came from a site near the Dutch town of Schipluiden. There, the sky was 10,000 times brighter than the darkest observation reported from Kitt Peak in the USA. “This difference is much larger than what is observed in the daytime” said Kyba. “It is roughly comparable to the difference between a surface illuminated by direct sunlight and one in the dim area between two street lamps.”

Even when the researchers restricted their analysis to average sky brightness at midnight, large differences remained. “Overcast nights in Berlin were typically 300 times brighter than those on the Dutch island of Schiermonnikoog in the North Sea” said Kai Pong Tong, the study’s second author and a PhD student at the University of Bremen.

The impact of brighter nights on the natural environment is still largely unknown. Researchers hypothesize that this change affects the behaviour of nocturnal animals, affects navigation and migration for some species, and unbalances traditional predator-prey relationships. Even social interactions such as reproduction are believed to be affected.

Kyba points out that although the present study is the most widespread to date, it considered only a small fraction of the Earth’s nightly lit area. The researchers call for an international network of similar monitoring stations. The data gathered by such a network would allow researchers to calibrate and test models that predict skyglow in areas for which monitoring doesn’t exist. “Models will be an essential tool to understand the social and environmental impacts of skyglow” according to Kyba.