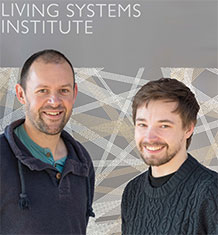 PhD student Josh Eaton and other members of the West Lab awarded 2020 Best Paper from the Oligonucleotide Therapeutic Society.

The copying of DNA into RNA by transcription is one of the most fundamental mechanisms in life.  A paper by Josh Eaton in Steve West's lab makes a breakthrough in our understanding of how this copying process is stopped, or terminated, in the right place.  Not only did they discover the mechanism for how this occurs naturally, but they also devised a method to induce termination on demand.  This method uses short pieces of DNA, called oligonucleotides, to induce a cut in the RNA that leads to termination.  The won Paper of the Year from the Oligonucleotide Therapeutic Society.  In the future, termination on demand might be a highly useful therapeutic strategy for diseases caused by mutations affecting where transcription stops.

Steve West did his PhD at Oxford University in Prof Nick Proudfoot’s lab. It was here that he developed a strong interest in understanding mechanisms of transcriptional termination. After remaining in Oxford for a post-doc, he obtained an independent fellowship from The Wellcome Trust to establish his research group in Edinburgh where his lab’s focus remained on transcription and RNA metabolism. Following a short stint at The University of Sheffield,the lab relocated to Exeter to join the newly established Living Systems Institute where his research into transcriptional mechanisms continues to be funded by The Wellcome Trust.

Josh Eaton was an undergraduate at The University of Sheffield, after which he joined Steve’s lab as a PhD student funded by The Lister Institute before relocating to Exeter. Josh’s PhD work has focused on establishing CRISPR/Cas9 genome-editing as a means to study RNA metabolic factors and combining this with transcriptome-wide mapping of transcription. This interest lead to the hypothesis that 5’ phosphate-containing cleavage products might promote transcriptional termination irrespective of the mechanism that generated them. The finding that RNaseH1-directed RNA cleavage indeed promoted transcriptional termination confirmed this and in part led to the paper that we are pleased has been nominated by the OTS.