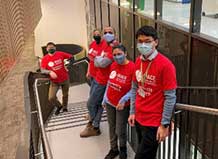 The BRACE award will fund research into the communication of nerve cells and their degeneration relating to Alzheimer’s disease. The research team will test how Wnt signals and β-amyloid interact in neurons to regulate the maintenance and growth of synaptic connections.

The Living Systems Institute (LSI) is delighted to announce a new grant from a charity which funds university research in SW England and S Wales into Alzheimer’s disease and other forms of dementia. The grant from BRACE to the LSI team is part of the charity’s acclaimed pilot scheme which pursues new and promising lines of research and can effectively pump prime more major research programmes.

This award will fund important research into cell communication and its degeneration relating to Alzheimer’s disease to two LSI groups under the direction of Dr Steffen Scholpp, Associate Professor Cell and Developmental Biology.  The team have been awarded a grant to study critical cell signalling which governs the essential activities and coordinate multiple cellular actions and form the basis for the number, density and strength of synapses which provide communications between neurons in healthy brains. The project is due to commence in early May of this year.

Dr Scholpp will be working with another LSI Principal Investigator Dr Akshay Bhinge, Senior Research Fellow.   Dr Scholpp and his group are experts in signalling molecules and their distribution and interaction while Dr Bhinge and his group focus on developing complex human models of the nervous system to understand motor neuron diseases to facilitate the development of future therapies aimed at halting or reversing relentless neuronal loss.

In this project, Prof Steffen Scholpp and his research team will test how WNT and β-amyloid interact in neurons. The researchers hypothesise that WNT signalling regulates the maintenance and growth of synaptic connections. In contrast, β-amyloid is required for pruning of unnecessary synapses. The research team will image the formation and disassembly of synaptic connections to test if WNT and β-amyloid keep a delicate balance between synaptic plasticity and synaptic stability: an important step towards an understanding of the underlying molecular mechanism in AD.

Dr Scholpp commented that he was excited at the opportunity to apply the LSI’s Wnt signalling expertise to the challenge posed by AD degeneration. “BRACE does incredibly important work in this area and we feel privileged to be a part of it. We are hopeful that success within this project may attract much needed additional resources directed to breakthrough discoveries relating to dementia-related diseases.”

As BRACE Chief Executive Mark Poarch confirmed: “The University of Exeter has an ambitious and important programme of dementia research, and BRACE is proud to have supported several of its projects, the latest being Professor Scholpp’s. The rapid development of COVID vaccines has shown what can be achieved when the human race is sufficiently determined to combat a health threat, and we must do all we can to ensure that dementia researchers are similarly equipped with the resources they need.”