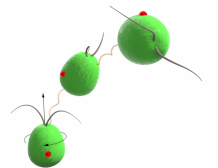 Chlamydomonas cells are able to sense light through a red eye spot and can react to it, known as phototaxis

Scientists have made a pivotal breakthrough in the quest to understand how single-cell green algae are able to keep track of the light as they swim.

A team of researchers from the University of Exeter’s flagship Living Systems Institute has discovered how the model alga Chlamydomonas is seemingly able to scan the environment by constantly spinning around its own body axis in a corkscrewing movement. This helps it respond to light, which it needs for photosynthesis.

The tiny alga, which is found abundantly in fresh-water ponds across the world, swims by beating its two flagella, hair-like structures that adopt a whip-like movement to move the cell. These flagella beat in much the same way as the cilia in the human respiratory system.

Chlamydomonas cells are able to sense light through a red eye spot and can react to it, known as phototaxis.  The cell rotates steadily as it propels itself forwards using a sort of breaststroke, at a rate of about once or twice a second, so that its single eye can scan the local environment.

However, the intricate mechanism that allows the alga to achieve this helical swimming has been previously unclear.

IN the new study, the researchers first performed experiments which revealed that the two flagella in fact beat in planes that are slightly skewed away from each other.

Then, creating a sophisticated computer model of Chlamydomonas, they were able to simulate the flagella movement and reproduce the observed swimming behaviour.

The researchers discovered that the flagella were able to move the Chlamydomonas in a clockwise fashion with each power stroke, and then anticlockwise on the reverse stroke – akin to how a swimmer rocks back and forth when switching from one arm to another. Except here the cell feels no inertia.

Furthermore, they also deduced how simply by exerting slightly different forces on the two flagella, the alga can even steer, rather than just move in a straight line.

The researchers were able to show that by adding in an additional influence, such as light, the alga can navigate left or right by knowing which flagellum to stroke harder than the other.

Dr Kirsty Wan, who led the study said: “The question of how a cell makes these types of precise decisions can be a matter of life or death. It’s quite a remarkable feat of both physics and biology, that a single cell with no nervous system to speak of is able to do this…It’s an age-old mystery that my group is currently working hard to solve.”

For the study, the researchers were able to test various scenarios to determine which variables were influencing the trajectory.  Their study showed that by varying different parameters, such as if one flagella is slightly stronger than another, the tilt plane of the flagella or its beat pattern, the algae can manipulate its own movement.

Team member Dr Dario Cortese added: “The agreement of our model with the experiments is surprising really, that we could effectively capture the complex 3D beat of the flagella with a very simple movement of a bead going around in circles.”

The study entitled "Control of Helical Navigation by Three-Dimensional Flagellar Beating" is published in the journal Physical Review Letters on Wednesday, February 24th 2021.