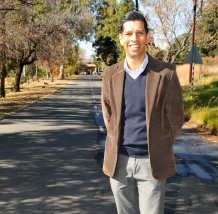 Professor Nelesh Govender, an expert in fungal diseases and antifungal resistance, has been appointed an Honorary Professor at The MRC Centre for Medical Mycology (MRC CMM).

Professor Govender is currently Head of The Centre for Healthcare-Associated Infections, Antimicrobial Resistance and Mycoses (CHARM), part of the National Institute for Communicable Diseases in Johannesburg, and works closely with the South African Department of Health to generate evidence to guide government policy.

His area of expertise is in medical mycology and in the field of antimicrobial resistance where his work has focused largely on antifungal resistance.

“Invasive fungal diseases are neglected, particularly in resource-limited settings, even though they account for an enormous burden of suffering and death,” Professor Govender said.

“Over the last 15 years, my centre at the National Institute for Communicable Diseases has been devoted to the detection, prevention and control of regionally-important fungal diseases and antifungal resistance.

“We’ve used epidemiological, mycological and genomic approaches to understand who is most at risk for these life-threatening infections and why.”

Professor Govender is the current President of the Federation of Infectious Disease Societies of Southern Africa (FIDSSA), co-chair of the South African national neonatal sepsis taskforce and co-chair of the advanced HIV disease task team.

Talking about his honorary appointment at the University of Exeter, Professor Govender said: “My appointment formalises a long-standing and fruitful relationship with the MRC CMM at Exeter and the affiliated Africa Unit at UCT.

“I’m excited to work closely with the CMM in this capacity and hope that we can leverage our relationship to strengthen medical mycology in southern Africa and more broadly, on the African continent.”

Professor Gordon Brown, Director of the MRC CMM, said: “We are delighted that Professor Nelesh Govender has joined the Centre in an honorary capacity.

“Nelesh brings a wealth of cutting-edge expertise in clinical and diagnostic aspects of fungal infections, particularly cryptococcal disease, and being based in South Africa, will help support the research and training ambitions of our Africa Unit in Cape Town.”