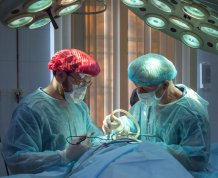 Nitrous oxide adds disproportionately to the carbon footprint of anaesthesia

In the UK, healthcare accounts for more than five per cent of national greenhouse gas emissions, and as much as 10 per cent in the US. Inhaled general anaesthetics are particularly potent greenhouse gases and as little is metabolised almost all that is administered is breathed out to end up in the atmosphere. The commonly used anaesthetic agents have been considered to vary considerably from as little as 1.5 for sevoflurane to more than 60 kg carbon dioxide equivalence for an hour’s anaesthetic with desflurane. However, research led by a team from the University of Exeter have discovered that the original assumptions failed to consider the manufacture of the anaesthetics, questioning the validity of the initial assumptions and the subsequent conclusions.

Led by the University of Exeter and funded by Innovate UK, the study published in Resources, Conservation and Recycling set out to model different anaesthetic scenarios including the application of new vapour capture recycling technology allowing for waste anaesthetic to be captured, extracted and purified and remarketed.

The new research built on the last analysis of the carbon footprint of inhalational anaesthesia by Jodi Shearman and colleagues in 2012 and analysed the synthetic process of the commonly used anaesthetics, sevoflurane, isoflurane and desflurane, the use of nitrous oxide, as well as the injectable anaesthetic, propofol in a carefully conducted life cycle analysis.

Modelling the gas combinations typically used for anaesthesia in the UK, they found that the carbon footprint of sevoflurane is as low as that of propofol, where an oxygen and air mix is used at the lowest flow rate so long as anaesthetic recycling is in place. However, the team found that when the current manufacturing method is taken into account, the carbon footprint of sevoflurane anaesthesia is similar to that for desflurane anaesthesia.

The team were also able to conclude that nitrous oxide adds disproportionately to the carbon footprint of anaesthesia and supports the current move by the NHS to reduce the use of this particular greenhouse gas. Furthermore, the carrier gas used to administer the anaesthetic is important – with an air and oxygen mix reducing emissions compared to nitrous oxide.

Lead author Dr Xiaocheng Hu, of the University of Exeter Medical School, said: “our results are an important step in supporting healthcare providers to reduce their carbon footprint. To reduce the carbon footprint of inhalational anaesthetics, this study encourages the continued reduction in the use of nitrous oxide and recommends a wider adoption of anaesthetic recycling technology.”

The paper is entitled ‘The carbon footprint of general anaesthetics: A case study in the UK’, published in Resources, Conservation and Recycling.