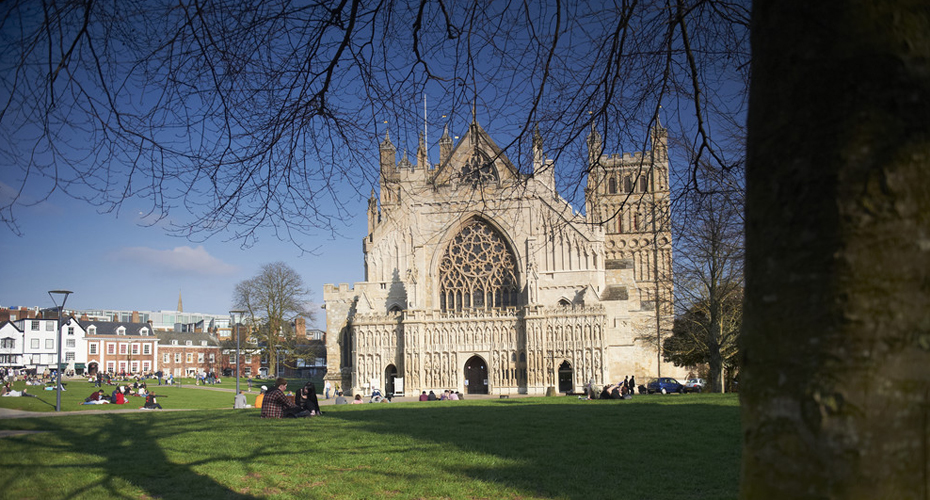 In Exeter you’re never more than a few steps away from a reminder of its diverse and exciting past.

Originating as a Roman fort, and the most south-westerly Roman fortified settlement in Britain, Exeter has one of the longest and most distinguished histories of any British city. The Roman wall, which can be seen most prominently in Southernhay, was built in AD 200.

Since its creation the city has been occupied by Saxons, Danes and the Normans, each adding their own fortifications. In fact William the Conqueror laid siege to Exeter, the only remaining stronghold in England following his victory at Hastings two years earlier, during the winter of 1068; Rougemont Castle was built as a reminder to the local people that he was now in charge.

Many of the city centre’s ancient buildings were destroyed during World War 2 as part of the so-called “Baedeker raids”, in which targets were chosen for their cultural and historical rather than their strategic or military value. This creates an intriguing mix of ancient and modern architecture across the city centre, making the areas that survived all the more special and interesting places to visit.

» Visit Exeter for more information on things to see and do in the city.

Located right at the heart of the city centre, Exeter's imposing gothic cathedral started life as a monastery in around AD 680, later being transformed into a new Cathedral by William Waelwast, the third Bishop of Exeter and the nephew of William the Conqueror. The two great square towers on either side of the Cathedral are the only remains of the Norman building.

The Cathedral boasts the longest unbroken stretch of 13th Century Gothic vaulting in the world, an early set of misericords, and an astronomical clock, as well as stunning stained glass windows and some of the finest medieval sculptures in England. It is also home to the Exeter Book, Codex Exoniensis, a 10th century collection of Anglo-Saxon poetry.

These days part of the Cathedral is given over to a picturesque café, and the picturesque green which surrounds the building is a bustling sun trap.

Exeter's city centre is teeming with history, which you can explore via a Red Coat Guided Tour. Tours are free with no need to book, and last from 30 minutes to two hours depending what you want to see: from 'Exeter Blitz' to 'Murder and Mayhem' and 'Ghosts and Legends'!

The city's Roman origins are clearly visible from the 2000-year-old Roman Wall which defined the original city perimeter. Around 70 per cent of the wall still stands, including all four main gatehouses, which played a key part in the English Civil War.

Grade I listed St Nicholas’ Priory was a Benedictine monastery founded in Exeter in 1087, the first medieval monastery in the city. During the dissolution of the monasteries by King Henry VIII in 1536, the church and chapter house range were pulled down, but the domestic buildings were left intact and later became the Tudor home of a wealthy merchant family. Still furnished as an Elizabethan town house, the priory has been used as a museum since 1916.

Rougemont Castle, founded for William the Conqueror in 1068, was built in the northern corner of the Roman city walls on a knoll known as red hill, hence the name ‘Rougemont’. The castle is mentioned in Shakespeare's Richard III in reference to Richard’s visit to Exeter in 1483. Devon's county court was located here from at least 1607, and the three Devon Witches, ‘The Bideford Witches’ (the last people in England to be executed for witchcraft) were tried here in 1682. It is now a scheduled ancient monument with Grade I and Grade II listed buildings. A number of events take place throughout the year at the Castle including festivals, concerts, and exhibitions, often outside in the castle grounds (weather permitting) – a unique experience.

The magnificent Guildhall building, in the very centre of town, is purportedly the oldest municipal building still in use in the country and has been the centre of Exeter’s civic life for more than 800 years. A structure of outstanding architectural interest, it’s been a Grade I listed building since 1953 and is also a scheduled ancient monument, highlighting its national importance.

Getting its name from Henry Gandy, Mayor of Exeter in 1661 and 1672, Gandy Street might just be the inspiration for Diagon Alley from the Harry Potter books with its cobbled streets, independent shops, bars, and restaurants.

Originally opened in the 1950s to replace buildings severely damaged in World War 2, one of which can still be seen in situ today, Princesshay was subsequently rebuilt in a £225 million city centre redevelopment, which completed in 2007. Home to dozens of shops, bars, and restaurants, it combines big high street names with specialist and independent shops to create a cosmopolitan café culture.

One of the most attractive areas of the city, Exeter’s historic quayside is popular with locals, students and visitors alike. A 10 minute walk from the city centre, it has a fascinating history, beautiful architecture, lively pubs and restaurants, and a cluster of antique shops. A multitude of events happen on the River Exe throughout the summer, including dragon boat racing, open air concerts, markets, street food, charity events and art exhibitions. The Quay is also a launchpad for accessing National Cycle Route 2, which stretches down both sides of the Exe estuary, to Exmouth on the east and Dawlish on the west.

The Exeter Ship Canal was built in the 1560s, making it one of the oldest artificial waterways in the UK. Today you can hire canoes and kayaks from the Quay (safety equipment and tuition provided) and explore the canal for fun. Many people row along the canal to The Double Locks and Turf Locks Inn, two great, student friendly pubs. You can also take boat trips along the River Exe and Ship Canal with Exeter Cruises. Cruises normally take place at weekends between Easter and October, and daily in July and August, and you can choose the 45 minute round trip, or stop for a bite to eat before catching a later boat back.

Exeter Science Park is paving the way for leading science and laboratory research, as well as boosting the regional economy. Located at the gateway to the Exeter and East Devon Growth Point area, Exeter Science Park occupies the perfect location in a grassland setting with immediate access to the motorway, trunk road networks and Exeter International Airport.

With a considerable scientific resource on the door step, including the Met Office and the University, companies located on the Park will benefit from the strong networks that have been built up regionally, nationally and internationally.

Exeter boasts more historical sights than any other town in Devon or Cornwall, legacies of an eventful existence dating from its Celtic foundation and the establishment here of the most westerly Roman outpost. After the Roman withdrawal, Exeter was refounded by Alfred the Great and by the time of the Norman Conquest had become one of the largest towns in England, profiting from its position on the banks of the River Exe. The expansion of the wool trade in the Tudor period sustained the city until the eighteenth century, since when Exeter has maintained its status as Devon’s commercial and cultural hub.

Rough Guide to the South West