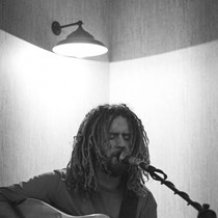 Alumnus and full-time musician James Dixon (Bio-Chemistry, 2010) has lost his trademark locks in order to raise more than £4000 for his local food bank.

James had planned to change his ‘surfer-dude’ look for a while, but when lockdown hit it presented the perfect opportunity to bite the bullet and raise money for charity at the same time.

The journey to becoming the Folk and Blues musician he is today started when James first picked up a guitar at age five. After graduating from the University of Exeter James brought a small renewables business he worked for to the Innovation Centre when they opened a South West branch, and after working there for a while he left in 2015 to pursue his passion of being musician full time. This was also around the time he started growing his hair out, which turned out into a very busy Afro and after five years naturally formed into hundreds of tiny dreadlocks which James’ felt came to define him as well as his developing music career.

He regularly played locally in Exeter, Topsham, Falmouth and Bude, and even featured at the University of Exeter Staff Festival in 2019. He was due to join the great Blues musician Seasick Steve on his European tour in March 2020 as a support act, with James planned to open for Steve at all 10 venues across Europe. However, when lockdown came along the tour was cancelled and he decided the time had come to chop his natural locks off on Facebook Live to raise money for Bude Food Bank.

James was aware that the Covid-19 outbreak and UK lockdown would place families and individuals in his local community, already experiencing food poverty, under greater strain and cause many new people to urgently need support as the situation worsened.  He aimed to raise £1,000 and managed to end up with an amazing £4,100 which the group was overwhelmed by and will go towards helping to reach those people in the local community who need their support.

James has now worked for five years as a combination of singer, songwriter, guitarist and storyteller with strong folk roots who has developed his style to include his love of slide guitar and blues. Growing up the first music James says he really connected with was Led Zeppelin, Queen, Jimi Hendrix and Neil Young.

His Bromeliad Acoustic Sessions EP was released in 2017 and this year James’ latest album Trespassing Light was released in March. You can find out more about James’ music on his Facebook page and website.