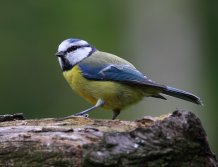 A year-long study into the behaviour of over 450 blue tits and great tits found suburban neighbourhoods attract far more birds to their feeders than terraced streets.

Birds prefer to fly between the gardens of leafy suburban neighbourhoods to visit bird feeders than city terraces or new-build estates, a ground-breaking study tracking the behaviour of hundreds of garden birds has found.

A year-long study into the behaviour of over 450 blue tits and great tits found that a suburban neighbourhood with trees, shrubs and hedges between properties attract far more birds to their feeders than a Victorian urban terrace or manicured, modern housing estate.

The research led by Dr Daniel Cox, an ecologist from the University of Exeter, found that garden birds moved more frequently between gardens that have trees and shrubs, giving them a safe route to hop and fly from garden to garden and bird feeder to bird feeder.

But they were less likely to move between homes with paved gardens, or housing estates with manicured lawns but fewer trees or shrubs. Having roads between gardens also hindered movement, the research the Movement of feeder-using songbirds: the influence of urban features, published in the Journal Scientific Reports, found.

The academics attached tiny tags with a unique electronic number onto the legs of 452 blue tits and great tits, two species which typically visit garden bird feeders. They then attached scanners to 51 bird feeders, filled with bird seed, in the gardens of urban terraced homes, a green suburban neighbourhood and a new-build estate.

Research published earlier this year by Dr Cox of the University of Exeter entitled Urban Bird Feeding: Connecting People to Nature showed that watching birds at a bird feeder promotes feelings of being connected to nature and makes people feel relaxed.

Another paper published last year showed that people prefer watching song-birds, such as blackbirds, robins, blue tits and great tits, in their garden to other varieties of garden bird. Dr Cox found people prefer to see more species of birds in their garden, rather than just one variety. According to the Likeability of Garden Birds: Importance of Species Knowledge and Richness in Connecting People to Nature, published last year, people’s favourite species was the robin, their second favourite the blue tit and their least favourite the wood-pigeon. Magpies and crows were also unpopular.

Dr Cox said that bird lovers should ideally plan with their neighbours to plant trees and shrubs along the boundary lines of their properties to attract birds. He said the number of trees, hedges and shrubs in a neighbourhood could influence whether song birds fly between feeders and, therefore, how often people are likely to see birds in their garden.

The University of Exeter ecologist said: “The more greenery and more vegetation there is the more easily birds can fly between gardens. My research has shown that, for people living in cities, watching garden birds increases their connection to nature and makes them feel relaxed. Understanding how birds move through urban areas will help urban planners and policy makers to make cities better places to live.”

He added: “This was the first study of this scale, and the first in urban areas that used bird feeders with scanning technology to monitor when birds carrying a small tag visited the feeders. This allowed us to track movement of blue tits and great tits at an individual level. Neighbourhoods with more connected vegetation and trees allowed birds to move between garden bird feeders more frequently.”

Movement of feeder using songbirds: the influence of urban features by Daniel TC Cox, Richard Inger, Steven Hancock, Karen Anderson and Kevin J. Gaston is published in Scientific Reports. The study was carried out as part of the Fragments, functions, flows and urban ecosystem services project. A collaboration between the University of Exeter, University of Sheffield, Cranfield University and the British Trust for Ornithology.