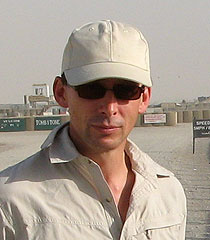 Anthony King is a Professor of War Studies at Warwick University, specialising in the study of the war and the armed forces and is particularly interested in the question of small unit cohesion.

Since 2004 he has been conducting research on the armed forces and this work has involved two major projects, one on European military transformation and the other on combat and cohesion, supported by the British Academy, the Nuffield Foundation (respectively) and, in both cases, by the ESRC. This work has culminated in the publication of The Transformation of Europe's Armed Forces: From the Rhine to Afghanistan (Cambridge University Press, January 2011), and The Combat Soldier: Combat and Cohesion in the Twenty and Twenty-first Centuries (Oxford University Press, January 2013).

The transformation project plots the trajectory of military change in Europe especially since the end of the Cold War, focusing on Britain, France and Germany, as the major European powers, and NATO as the institutional framework in which development is occurring. The research investigates Europe's rapid reaction brigades, staff colleges, and operational headquarters to claim that a transnational military is emerging in which concentrated nodes of military power are emerging in each country but with ever closer transnational relationships. The project seeks to connect detailed changes at the tactical and cultural levels to wider transformations of the military and political institutions in Europe.

The project on cohesion plots the development of infantry tactics from the First World War to current operations in Afghanistan to explore the different ways in which western armies have generated combat performance in their infantry platoons. The central thesis of the project is that, with inadequate time and resources, the citizen armies of the twentieth century generally failed to prepare its combat soldiers for battle adequately and relied instead on appeals to masculinity, nationality and ethnicity (and recourse to mass tactics) to encourage performance from the infantry. By contrast, today's professional force has been able to generate higher levels of performance by the inculcation of collective drills which the soldiers are intensely trained to perform. The research explores not only how professionalisation has changed the nature of combat performance, ie cohesion, but the profound social implications both within the military and in civilian society of development. Not least, the move to a professional ethos has facilitated the accession of groups once excluded from the infantry, including most recently, women.

Anthony has published a number of other papers on the armed forces including a critical sociology of British operations in Helmand which has had influence at the level of policy. As a result of his research on the armed forces, Anthony has been increasingly engaged in consultancy work, offering advice to military organisations with whom he has worked including as a member the Prism Cell in ISAF's Regional Command South in 2009-10 where among other projects he worked on political analysis and a political engagement plan.