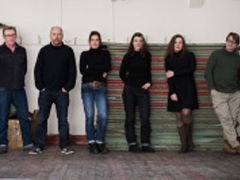 Forced Entertainment, founded by alumni from the English and Drama departments at the University of Exeter, has won the biennial International Ibsen Award. They make history, as they are the first group to win this prestigious theatre award, and the first British winner since Peter Brook, who was the first person to win the award in 2008.

Forced Entertainment have been performing together as a company since 1984. The creative team consists of six artists, Robin Arthur (1984), Tim Etchells, Artistic Director (1984), Richard Lowdon, Designer (1983), Claire Marshall, Cathy Naden (1984), and Terry O’Connor (1982). As English and Drama students, five of them met while studying at Exeter together, while Claire, an alumna of the University of Kent, joined the company in 1987. They have since become one of the most ground-breaking and acclaimed experimental theatre companies. Although they came together in Exeter, their home base is in Sheffield, and they have been presenting their work in the UK, Europe and beyond for the last three decades.

Professor Peter Thomson, Emeritus Professor of Drama at the University of Exeter was Head of Drama during their time at university. He said, ‘Forced Entertainment has been thinking laterally about theatre for over thirty years. The company is as innovative as it is unpredictable. Five of its six members, all Exeter graduates, have been there since 1984, a constancy that is probably unique among the shifting sands of the theatrical profession. This is the first time that the International Ibsen Award has been given to a group, and it places Forced Entertainment alongside such innovators as Peter Brook and Ariane Mnouchkine. What an achievement!’

Current Head of Drama, Professor Stephen Hodge, said ‘It is uncommon for a performance collective such as Forced Entertainment to remain intact for over three decades. This award is testament to the group's relentless effort to make theatre that is relevant to today's world, and cements their position as international pioneers in the field’.

On Forced Entertainment’s website they say, ‘The work we make tries to explore what theatre and performance can mean in contemporary life and is always a kind of conversation or negotiation, something that needs to be live. We’re interested in making performances that excite, challenge, question and entertain other people. We’re interested in confusion as well as laughter.’

Three of Forced Entertainment’s pieces will be performed as part of the festival programme at the National Theatre. Financed by the Norwegian state through the Ministry of Foreign Affairs, the company will receive NOK 2.5 million as part of their prize. It has been a successful year for Forced Entertainment, as Artistic Director Tim Etchells was awarded the 2016 Spalding Grey Award earlier this year on 18 February at the Museum of Contemporary Art in Chicago. This award was put towards their current touring production, Real Magic, which premiered this month in Germany.