FoodTrainer (FoodT) is a simple computer game that trains your brain to stop to certain unhealthy foods or drinks. Repeatedly playing this game builds up associations between certain foods (such as chocolate) and stopping, effectively putting the brakes on your eating behaviour.

Our research suggests that playing this game reduces cravings for foods like chocolate, making them easier to resist and reducing how much is eaten. Our first study in 83 adults showed that people who played the game just four times in one week lost weight and ate an average of 220 kcal less per day (roughly equivalent to a chocolate-iced doughnut!).

If you don’t have an android smartphone or iPhone and would like to try the food training game you can also play online. Note: The online version only works on computers with keyboards, not touchscreens/tablets.

The FoodT app has been developed in partnership with Psynovigo and was funded by the Wellcome Trust and University of Exeter.

To start playing FoodT we recommend you place your phone on a desk or surface in front of you in landscape mode. Try to play FoodT when you are alone, in a quiet environment, and before a meal as it may be important that you are hungry when playing to maximise its effects.

Before you start you have the option of selecting which categories of images you would like to train yourself to inhibit responding too. Please try to select categories of foods/drinks that you struggle to resist and would like to cut down on. You can select up to three categories. Alternatively you can leave the game with the default settings, which train you to inhibit responding to commonly eaten high-calorie snack foods (chocolate, cakes, biscuits and crisps).

The FoodT brain training app asks you to identify three types of food and drink you want consume less and then to press on the item on the screen when it’s in a green circle and not when an item is in a red circle. The app is based on a similar online game, which was shown to reduce users’ food intake and weight after playing the game four times.

The app asks you a few questions before and after you play so our research team can see whether it helps you reduce your food intake, craving and weight. You will also be asked for a few basic details about yourself (age, sex). The app will not collect any information about your identity. All the data you provide will be anonymous.

All data from the app will be sent anonymously to our researchers at the University of Exeter.

To see the preliminary results of our large online public study of food training please see the 2016 conference poster. It was presented by Dr. Natalia Lawrence et the British Association for Psychopharmacology conference in Brighton in July 2016

A more recent analysis of data from both our online and app (foodt) training can be seen in the 2019 analysyis of data poster, which was presented at the World Congress of Behavioural and Cognitive Therapies in Berlin in July 2019

Listen to Dr Natalia Lawrence talk about the FoodT trial.

Find out how to use the FoodT app. 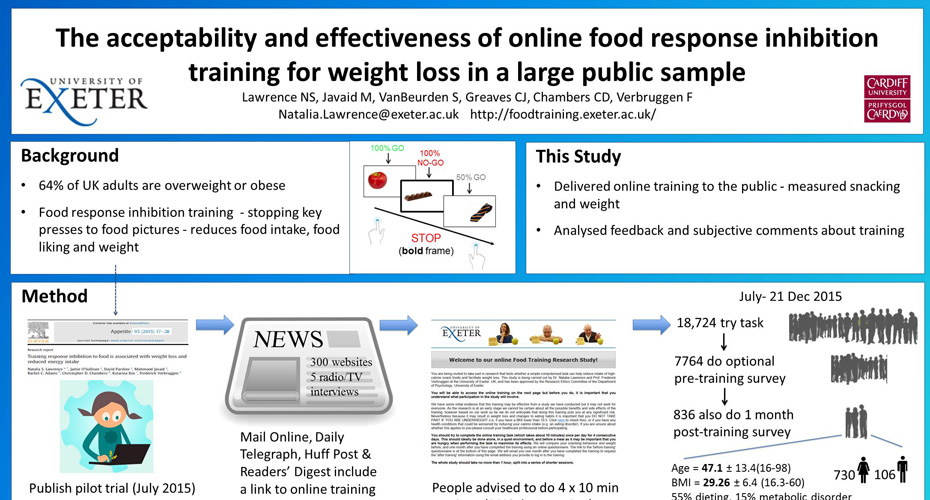 View the analysis of data poster 2019