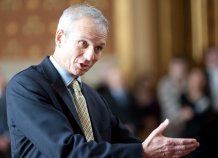 David Lidington met with academics and students studying politics and history. Image courtesy of the Foreign and Commonwealth Office via Flickr.

Cabinet Minister David Lidington visited the University of Exeter today and met academics who have given evidence to Parliament and students studying politics and history.

The Leader of the House of Commons, who is in charge of the overall management of the Government’s legislative programme, met Vice-Chancellor Professor Sir Steve Smith and academics who have given evidence to House of Commons committees.

He is the second Cabinet Minister this month to come to the university, following Education Secretary Justine Greening’s visit at the beginning of March.

Lidington gave a talk to a packed room of students and explained that he wanted Parliament to be accessible to people from all parts of the UK. He encouraged students and academics to engage with MPs by giving evidence through Commons committees and signing e-petitions.

“I am trying to get out of London to talk to people in different parts of the country about why Parliament matters and how we can make it more responsive,” he said.

The Leader of the House said he would like to see Commons committees hold more sessions in different parts of the country, including the South West.

Politics students and history students on the ‘Yes Minister’ history course taught by Professor Richard Toye grilled the Cabinet Minister on subjects as diverse as whether political satire erodes confidence in politicians, to comparisons between 16th century politics and Brexit negotiations.

Asked for tips from one student on how to become an MP, the Minister, who has been Conservative MP for Aylesbury since 1992, warned: “Don’t put all your hopes for happiness in politics.”

Young hopefuls should not only ensure they have a day-job, but practise fighting a general election in a seat they cannot possibly win. The Minister said all politicians should ensure they balance family and personal lives with their political careers.

The Minister praised the commitment and engagement of University of Exeter academics, including Professor Tamara Galloway, one of the world’s foremost experts on marine pollution. Professor Galloway’s evidence to the House of Commons Science committee helped influence a change in Government policy, and a ban on microbeads in cosmetics and cleaning products.

The Minister said Professor Galloway was an example of how positive engagement with Parliament could help shift government policy.

The Minister held a round-table discussion with academics who have given evidence to Parliament including Dr Ceri Lewis, who recently gave evidence to select committees on ocean acidification, and Dr Rob Ellis who told MPs how ocean acidification due to climate change could threaten the supply, and taste, of farmed fish and sea food. The Cabinet minister also spoke to Professor Richard Brazier who has given evidence to a number of Parliamentary and government committees. The discussion was led by Professor Phil Ingham, Director of the Living Systems Institute.

Dr Natalia Lawrence spoke to the Leader of the House of Commons about her pilot programme helping MPs and their researchers gain access to scientists for expert briefings before they hold debates and scrutinise legislation.

The Minister– a Tudor historian by training – also discussed Tudor history with Professor James Clark, Professor of History, and Associate Dean for Research.

The Leader of the House also held talks with Mike Shore-Nye, Registrar of the University, and Professor Tim Quine, the Deputy Vice Chancellor.