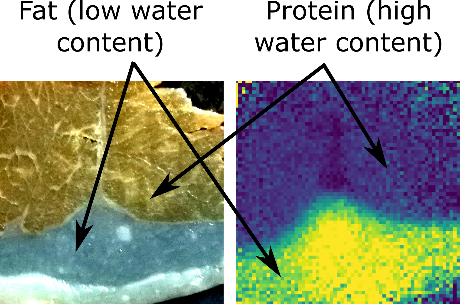 On the left is an optical image of a slice of fresh bacon, and on the right is a THz image of the same slice of bacon, taken using the imaging system in figure 2. The regions of fat and protein, with different water contents, show up very clearly in the THz image. 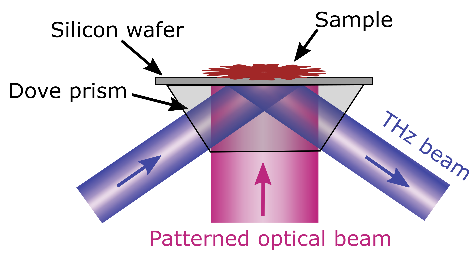 Schematic showing the total internal reflection imaging geometry used to take the THz image in figure 1. We hope to use this technique to aid in cancer diagnosis and treatment. 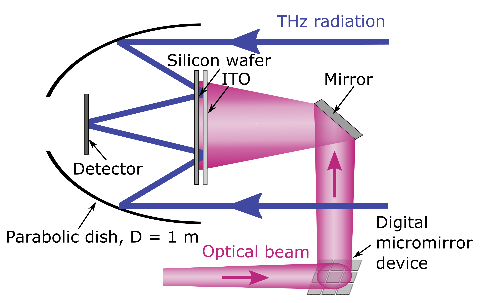 Diagram of the cavity modulator design for far-field THz imaging. The digital micromirror device produces a pattern in the optical beam, which in turn patterns the THz beam in the photomodulator, and allows the image reconstruction.

Thanks to recent advances in Terahertz (THz) imaging technology, it’s no longer just Superman who can see through walls! Using electromagnetic radiation at THz frequencies, between infra-red and microwaves, it’s possible to detect concealed and potentially dangerous objects behind walls or layers of clothing. However, THz technologies are relatively young, and there are still some hurdles to overcome.

Saving the world from potential security threats is one use of THz radiation, but is that enough to warrant the recent surge in research? As well as being used to identify metal objects and organic explosives [1], THz can also be used to image biological materials and distinguish tissues with different water content, for example as shown in figure 1. Higher water retention is one signature of cancerous cells [2], and high corneal water content can be an indicator of some eye diseases [3]. We can monitor the healing of wounds through dressings, reducing infection risk [4], and the hydration levels of plants to improve the use of agricultural resources [5].

So why aren’t we already performing all of these super-human feats? It comes down to the fact that THz is very difficult to generate, detect and manipulate. The historical lack of research into the use of THz radiation is often referred to as the “THz Gap”, and is due to the fact that the THz region lies in between two well-studied regions of the electromagnetic spectrum. Visible light and infrared radiation are produced by manipulating electrons in energy levels around atoms, thereby causing them to emit photons, such as in lasers or filament bulbs. At the other end of the spectrum, microwaves and radio waves are produced by the movement of electrons in metallic antennas. Neither of these approaches will be efficient for producing THz radiation, so instead new techniques are needed, such as photo-conductive antennas [6], impact-ionisation diodes [7] and difference frequency generation [8]. Similar problems are faced when detecting THz radiation, and detectors tend to be bulky, expensive and not very sensitive. Therefore when it comes to imaging, a single-pixel is often seen as the way to go. But if we only have one detector, we need to use a set of masks, or scan the THz beam around, to get the spatial information needed to construct an image. To achieve any of this, we need a THz modulator.

There are several approaches for modulating the amplitude or phase of THz radiation. These usually rely on optical [9], electronic [10] or thermal inputs [11], however magnetic and nonlinear techniques have also recently been investigated [12, 13]. Of these, optical modulation is particularly promising as it is relatively simple to implement, and can modulate higher frequencies with faster switching times than electrical or thermal modulation.

Optical modulation relies on changing the THz properties of a material by shining visible light on it. The obvious choice of material is a semiconductor, such as silicon, where charge carriers are excited into the conduction band under optical illumination, increasing the conductivity. Modulation using this technique has been demonstrated many times, but the optical intensities required are huge, and intense, ultra-fast lasers are usually needed [14]. This limits the suitability of such technologies for use outside the laboratory. Various methods for enhancing the optical modulation of THz have been tried, including the addition of graphene [15], resonant metamaterial structures [16, 17], and various semiconductors with designer coatings and dielectric stacks [18, 19].

My approach to this problem focuses in particular on tuning the carrier dynamics in silicon wafers, and using cavities and total internal reflection geometries to enhance the modulation, as illustrated in figures 2 & 3. These tactics for photomodulation mean we can move away from the use of intense optical sources, and modulate the THz beam using only the light from a commercial LED. Along the way I’ll also be investigating new ways to use these imaging systems, designing some THz markers and taking THz pictures of biological samples.