Industrial Action at universities during the 2019/20 academic year

Members of the UCU took part in industrial action including strike days and Action Short of a Strike in February and March 2020.

We have drawn up Frequently Asked Questions (see below) for you so to answer any queries that you might have.

We will ensure that any disruption caused by industrial action is carefully accounted for when evaluating student performance on modules and degree programmes. We have rich data which provides us with an empirical basis on which to measure and correct the impact of any action on teaching and learning. By carefully considering the effects of any disruption on module marks, we ensure that the final marks that contribute to your progression and degree award are fair and equitable. Naturally, normal appeal processes still apply.

We would like to highlight the resources that are available to support your mental health and wellbeing. This includes our self-help tool, SilverCloud and our Wellbeing Services at both the Exeter and Cornwall campuses.

If you have any questions or concerns about industrial action please contact our dedicated email address for students: industrialaction@exeter.ac.uk.

Below you will find answers to some of the most frequently asked questions regarding the recent industrial action.

What should I do if I think my exam performance has been affected by the strike action?

All marks that you receive throughout the academic year, including examination results, are provisional until they have been through the University’s Assessment, Progression and Awarding Committees (APACs). For undergraduate programmes, these take place in June after all assessments have been completed.

Each year we follow robust quality assurance measures, including participation by both internal and external examiners, when scrutinising and finalising assessment results (including examinations). The process includes careful consideration of module level performance to ensure our students’ academic outcomes have not been impacted by any factors beyond their control, including Industrial Action and Covid-19.

As part of the review, the University’s APACs (exam boards) may identify modules where the performance of students is significantly different from that we would expect based on comparative data. In these instances, module marks may be ‘scaled’ (i.e. adjusted so that standards are comparable across modules assessed at the same level).

Further information on the process can be found in the Teaching Quality Assurance Manual.

Whilst the University has undertaken every effort to mitigate the impact Industrial Action may have had on our student community there is an awareness that in some cases the learning inputs may not have been replaced to sufficient levels. Accordingly, the University will launch the Industrial Action Compensation Scheme following publication of exam results in July 2020.

Were the May examination papers be revised?

What support has the University put in place?

We would like to highlight resources available to support you, if needed. This includes our self-help tool, SilverCloud and we are putting additional resources into our Wellbeing Services at both the Exeter and Cornwall campuses.

There is further information on our Additional Support for Students page.

Who can I contact if I have questions or concerns?

We have set up a dedicated email address for students: industrialaction@exeter.ac.uk.

Will students still be able to graduate or progress?

Yes. There are recognised and long standing procedures at the University in relation to assessment, marking, and progression to the following year and awarding of degree classification that will be implemented. Any industrial action will not stop students being able to graduate or continue to the next year/stage of their studies.

Will attendance records be affected (including Tier 4 visa holders)?

As some teaching sessions will be cancelled during this period, we will not be recording Tier 4 contact points on any of the strike days.  This means that if you are not able to attend a lecture, tutorial or seminar because it has been cancelled, this will not have any impact on your Tier 4 status. We would ask that you continue to record your attendance using Digital Check In at all sessions that you do attend.

I am in the UK on a Tier 2 visa, will taking strike action have an impact on my visa sponsorship?

The UK government issued guidance in July 2018 that Tier 2 visa holders will not be penalised for some absences from paid work in the UK, which now include engaging in legal strike action. These changes mean that a Tier 2 visa holder's leave to remain will not be affected if such absences cause their salary to fall below the required threshold. For further information please see the Tier 2 policy guidance (point 234).

Can I claim compensation for missed teaching?

Whilst the University has undertaken every effort to mitigate the impact Industrial Action may have had on our student community there is an awareness that in some cases the learning inputs may not have been replaced to sufficient levels.  Accordingly, the University will launch the Industrial Action Compensation Scheme following publication of exam results on 8 July 2020.

Students can make an application to the Scheme where they feel their learning inputs have been materially impacted by the periods of Industrial Action during the Academic Year 2019/ 2020.  Applications will be considered on a case by case basis to reflect the impact on each student individually. Please follow this link for further information on the Industrial Action Compensation Scheme

Key information about the dispute

What is being done to resolve the dispute?

What is being done to resolve the dispute?

We are already working jointly with the Exeter UCU branch on issues relating to the use of casual and fixed term employment, the gender pay gap and equality, workloads and wellbeing. We are also committed to Fair Employment For All and aiming to agree changes to working arrangements so that all regularly timetabled teaching is delivered by staff employed on standard contracts of employment; the use of fixed term contracts is reduced; and Postgraduate Teaching Assistants receive standard paid time allowances for preparation, marking and associated activities.

At the national level, meetings between UCEA and trade unions have been focusing on the issues of workload, gender pay gap and ethnicity pay and casual employment in the Higher Education sector. Following the meeting on 24 January, UCEA (representing universities as employers) made a modified offer

On the USS pension scheme, a series of tripartite group talks is ongoing between representatives of UUK, UCU and USS to discuss reform to the USS pension scheme. Statements from all their meetings can be found online. We are hopeful that these talks will lead to a mutually acceptable outcome that ends the current pension dispute.

On 19 February, Universities UK and UCEA issued a joint open letter to all staff at universities affected by strike action. The letter provides an update on the significant progress to address concerns of university employees on pay, working conditions and pensions.

The Vice-Chancellor wrote to all colleagues and students on 17 February to provide an update on the actions we are taking to bring the disputes to an end.

How will we ensure that academic outcomes are not affected?

You can be assured that all alternative provision provided to students on every affected module was comprehensively logged and considered at each of the Assessment, Progression and Awarding Committees (APACs), alongside the marks for the module. This is part of the work to protect graduate outcomes for all students, with the APACs evaluating the impact and effectiveness of all mitigation provided to ensure fair and equitable outcomes for all students.

The APACs are enabled to adjust/scale marks for the cohort on the module, according to data that exists for previous years – ensuring that the impact of any disruption to teaching/assessments is accounted for.

Other information for students

How does the University intend to spend the pay that’s will be withheld from staff who participate in the industrial action?

The University is working with the Guild and Students' Union in Cornwall to determine how to spend the pay that was withheld from staff who participated in the industrial action. As well as supporting the work of the Assessment, Progression and Awarding Committees (APACs), which will review and make decisions on degree awards and progression, additional resources have also been allocated to key services such as Student Wellbeing. In recognition of the disruption experienced by students, the University may pay compensation to students who successfully claim significant impact and will also be covering the cost of graduation robing for the next graduation ceremonies, when they are able to be held.

All remaining withheld pay will be allocated to activities that support students affected by the strikes. Our considerations relating to the allocation of these resources will also take into account the impact of industrial action across various parts of the University, including across Colleges and campuses

The chart below provides an indication of the ways in which resources from withheld pay during the period of industrial action in Spring 2018 were allocated. 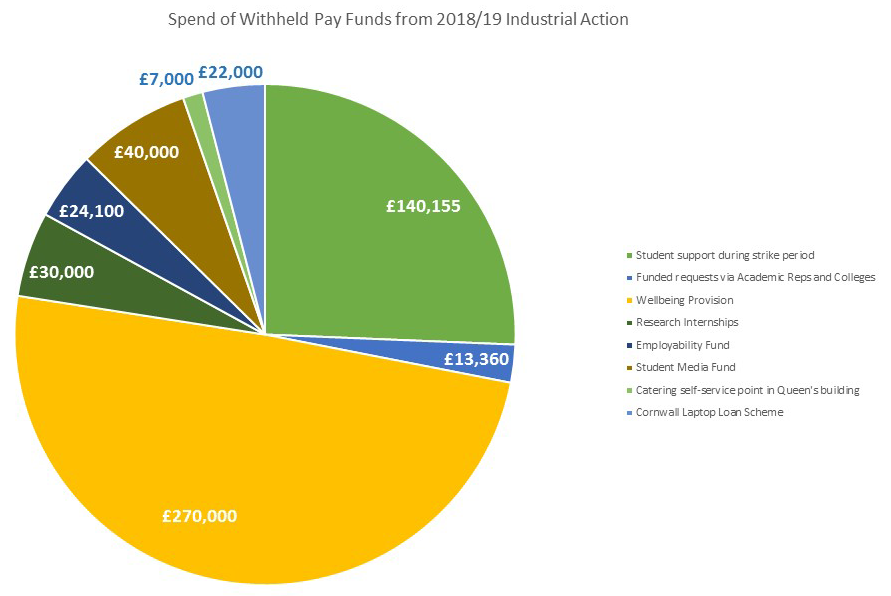 What is the Vice-Chancellor's salary?

Reports in the media have included inaccurate and misleading figures. The Vice-Chancellor's base salary is £315,000.

It is possible that Sir Steve will receive additional performance and loyalty payments in addition to his base salary when he retires, reflecting his strong leadership of our university for close to 20 years.

Full details of the Vice-Chancellor's remuneration are published in our Annual Report and Financial Statements each year. The most recent report can be read here.