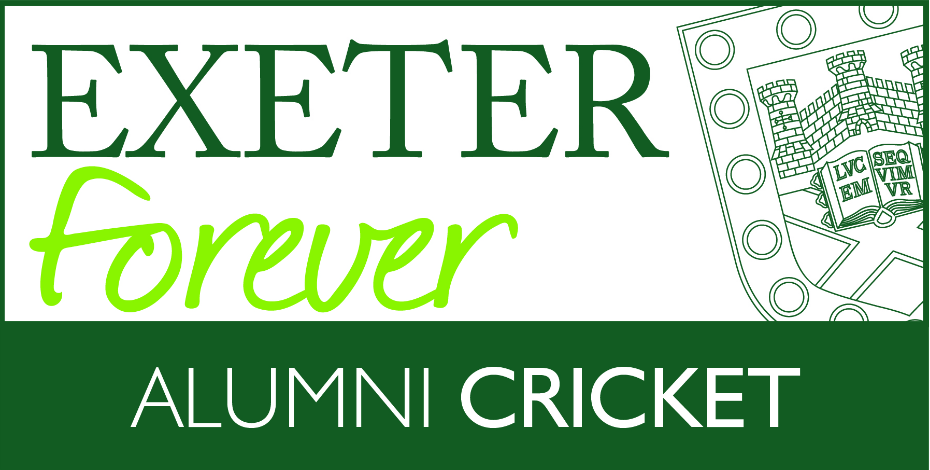 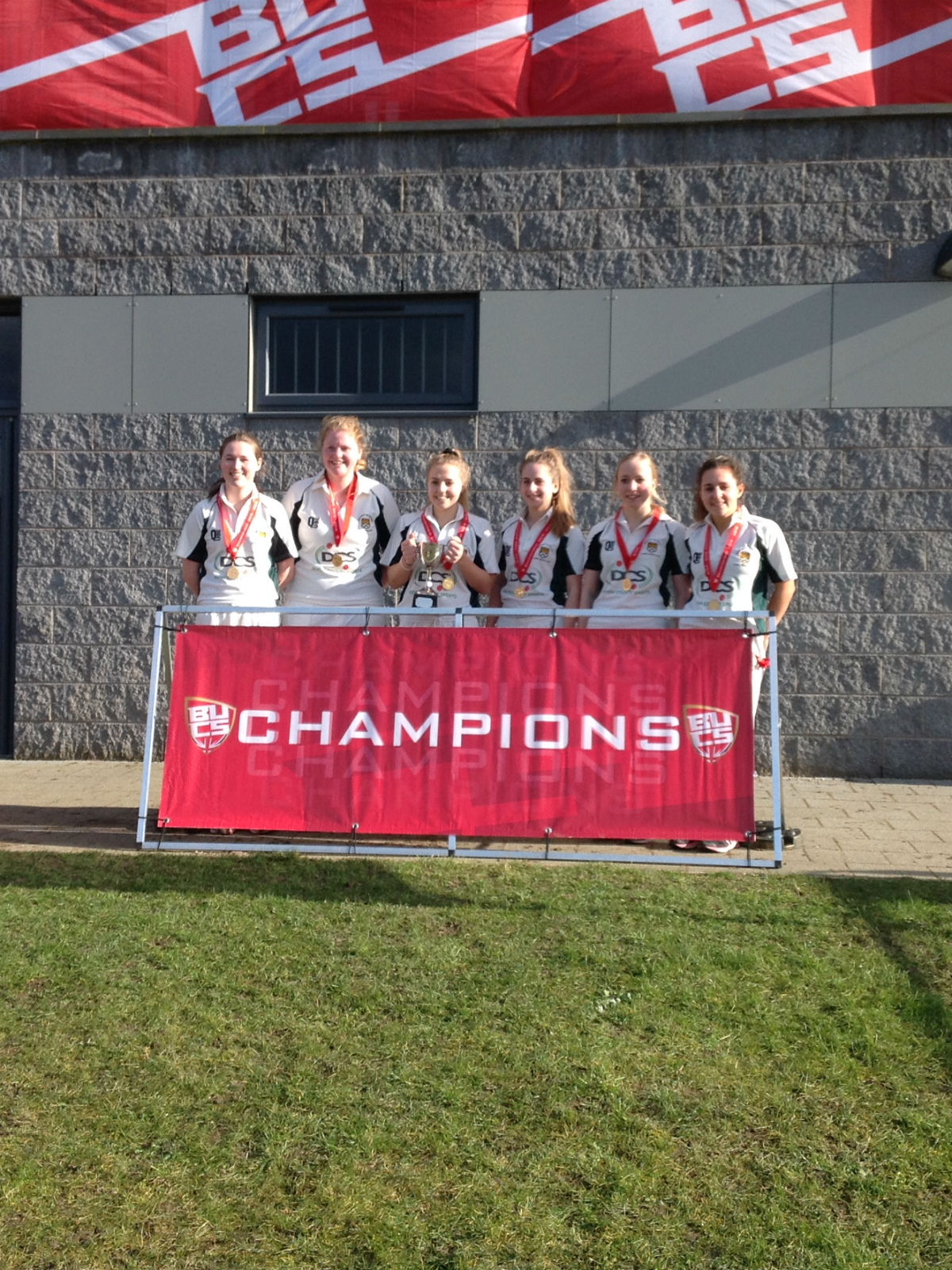 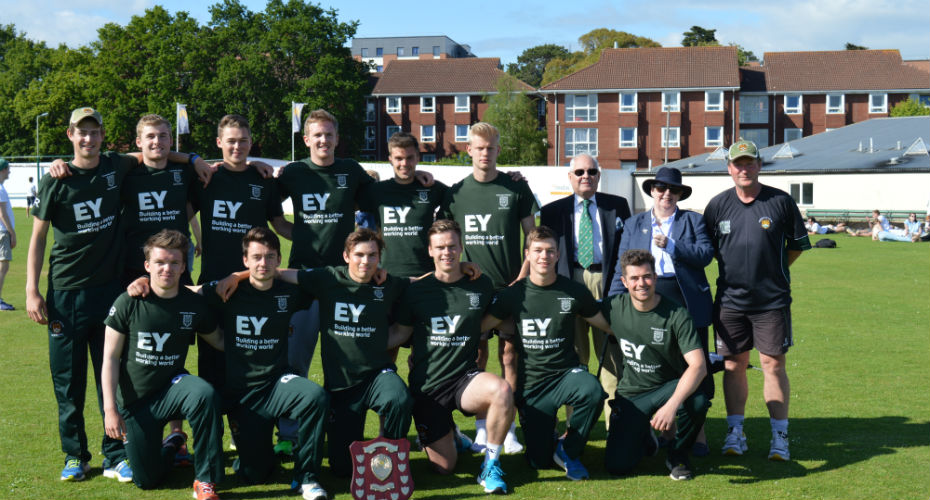 The University of Exeter runs both a men's and women's cricket club, with four men's teams and two women's teams competing in the British Universities and Colleges Sport (BUCS).

As a cricket programme, we are looking to:

-  Mirror first class academy setup for all our high performance athletes, both male and female

-  Develop people holistically over three years at the University, preparing them for their time in the working world

After having the misfortune of relegation in the 2015 season, EUMCC bounced straight back up in 2016 by not only winning the league, but beating rivals Bristol in the play-off final at Coombe Dingle. Other success has come in the indoor competition, with the EUMCC Indoor 2nd team winning the Trophy final in 2017/18 and the EUMCC Indoor 1st team reaching the National Finals at Lords in 2018, currently ranking us in the top 4 sides in the country. International recognition for the Club came in 2017/18 with seamer Ethan Bamber representing England at the U19 World Cup, as well as signing a professional contract with Middlesex. County representation has also come in recent years, with 2015 leaver Tom Abell being appointed Somerset CCC Captain.

An ever-growing club, women’s cricket has doubled in size in the last two years. One of the most successful BUCS clubs at the university, picking up BUCS Gold, Silver, and Bronze within the last three years, the women host a range of training sessions, from beginner level all the way to the high-performance programme for our most experienced players. As a smaller club, women’s cricket are incredibly inclusive and members have truly formed friendships for life.

For further information on upcoming events, or to become part of the Cricket alumni community contact us on SportsAlumni@exeter.ac.uk. All enquiries are totally commitment free and we are always happy to hear from our alumni.

This section will be developed as cricket alumni provide information. Please send any relevant memories you have as well as any photos or documents (programmes / annual dinner documents / league tables etc) / that you want to share here to sportsalumni@exeter.ac.uk. 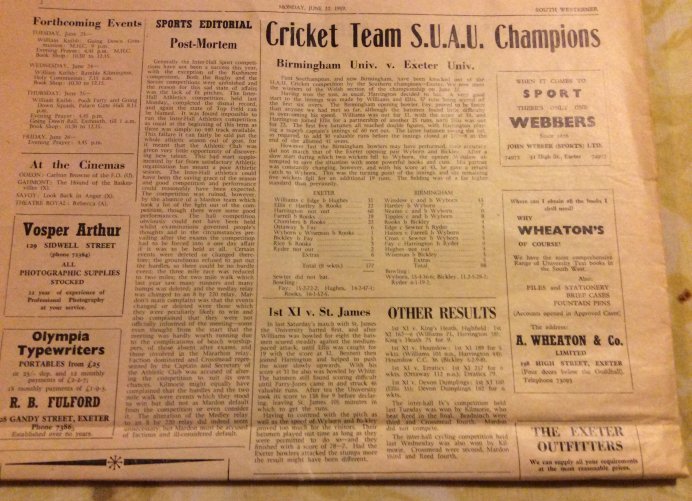 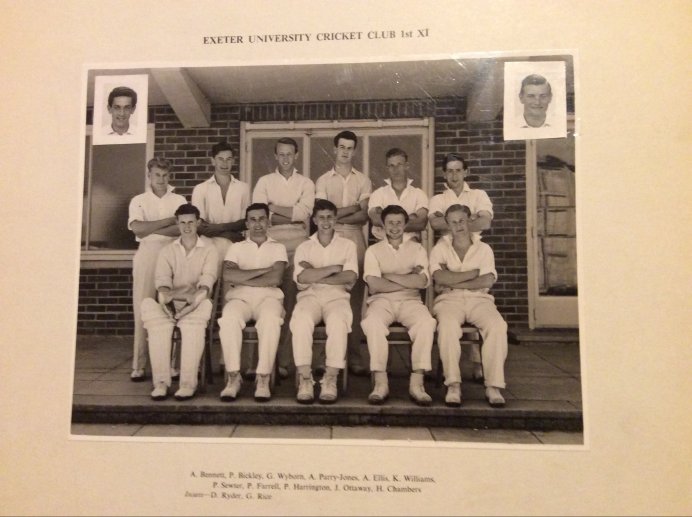 After graduation from Manchester in 1963, where I was VC of the UAU winning side, I came to Exeter to do a PGCE and played one summer for the first team. So I guess I may be one of the oldest in your group. Later as a member of staff from 1988, I played fairly often for cyclops, the staff team.

As a postgraduate, I was part of the first cohort of students to occupy the hugely controversial mixed halls at Duryard, since rebuilt,  though the original Kay House is still there. Last season I watched the first team play Bristol on the ECC ground and was amazed at the athleticism of the players, especially the speed of the bowling.  A far cry from the leisurely games on the old Top Field. Still, the batting track up there was so poor it would have been dangerous to face the same guys on it!

Here we have an all conquering, or is it an all conquered, side from the 1973/4 era. It is of course pre St Luke’s. Cricket was pretty much all we could beat them at. Be interesting to see if the other team members see this. That’s me Steve Moors centre front. I recognise Mike Matthews extreme right as we look at it and Terry White fourth from left. I think we were playing a public school which is why we dressed super smart for the occasion.

The fixture highlight was the Met Police on tour who entertained us regally. The 1974 team contained eight serving policemen, the police pathologist, the chap who drew the chalk lines around dead bodies and a bent car dealer.

At the end of the Summer term we toured Sussex but sadly have no photos. We were supposed to go to Barbados but the Minister of Education at the time removed funding. 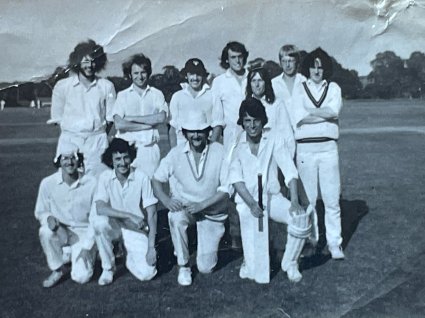 I joined, ostensibly then St. Luke’s, in 1978 and had 4 wonderful years in Exeter. The rugby 1st XV team was mainly St Luke’s players but the cricket 1st XI was far more mixed but by merging Exeter had become a force in the UAU, as it was known then. 1978 was the first year of the merger. So in the first summer in 1979 I was not a regular as we had a first class cricketer in Paul Downton, later to play for England! I was a wicket keeper so in direct competition with Paul. That year the 1st team lost in the quarter final to Durham, at the time the team to beat as they had a team full of players, who were already contracted to counties, and the second team won their UAU event.

For the following season, 1980, I was made team captain. As a result I was guaranteed a place! We still had the services of Paul Downton, Richard Ellison – another player to go to play for England – joined and an Australian came over for a year, Brad Green, who later played for his state. These 3 plus a group of exceptional players approached the season with optimism. We won our 4 group games, Bristol, Bath, Reading and Southampton. Then we played Leeds and won, which meant we faced Durham in the quarter final.

While we played really well, we possibly were lucky to win the toss and they had to bat on arguably the more difficult conditions. They only made 101, we made 104 for 3, so won quite easily, much to their annoyance! The Semi-final at Sheffield was not without controversy. We started and Loughborough batted first and were soon rattling along only for the rain to descend. Desperate to get the match finished, by the time we came back the next day we had to start again on a new wicket and this time we played much better and won. The final was scheduled for Trent Bridge, Nottingham but it rained relentlessly. The rescheduled final meant I was unavailable due to a hospital operation so didn’t play, but we beat Liverpool convincingly.

In 1981 we lost to Manchester in the quarter-final. In the following year, Mark Richardson had become captain and he took the team to the final, I didn’t play in the early rounds because of my finals, but we beat Loughborough in the final.

Throughout my time, cricket was a great activity, the 1st team played at Top Field and the second and third teams played at Gras Lawn. Then off to the students union to socialise! We played in the universities competition, played good local sides on the Sunday and towards the latter half of the term we would play lots of Tourist sides who had travelled to Devon.

Some images from Stuart: 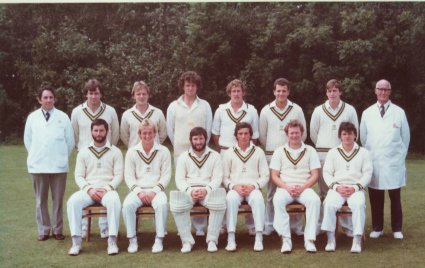 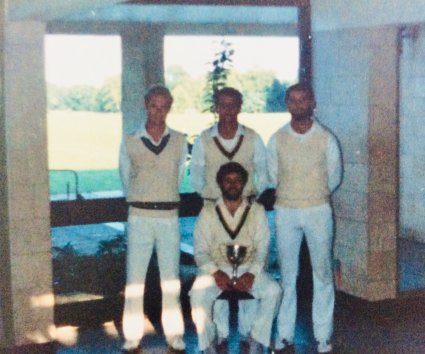 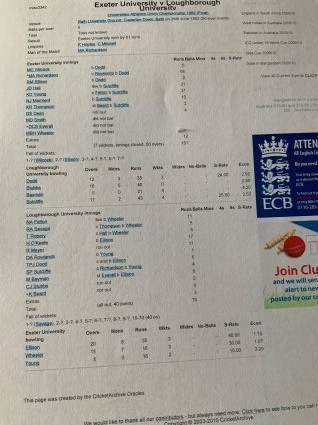 What Exeter University Cricket meant to me

"I specifically chose Exeter University over other universities due to its high standards and reputation. Even though Exeter University was not part of the MCC Universities, we consistently performed well in the BUSA Competition. The cricket team felt like a family and we created a special bond amongst each other. We weren’t necessarily superstars on paper, but we played as a team and always fought hard till the last ball. It would be fair to say we exceeded our expectations. Being a cricket scholar at the University of Exeter gave me an immense sense of pride. I wanted to make a difference and put Exeter University on the cricket map."

"We consistently performed well in my three years at Exeter University. If not mistaken, our worst position was third in the league table over the three years I was there. It was a shame we couldn’t bring the trophy back in the finals; however, we did bring the trophy back in the indoor cricket competition. We travelled to Lord’s by train for the big day and we played very well throughout the day and in the finals. Our journey back to Exeter on the train was very memorable and enjoyable."

"After finishing at Exeter University, I was a professional cricketer for Somerset County Cricket Club. I retired in 2013 due to injury. I then took up a post as Director of Cricket and Teacher of Business and Accounting at Queen’s College in Taunton. I completed my PGCE in Secondary Education and gained my qualified teacher status. I was at Queen’s College, Taunton for five years and currently, I work for Shaw Trust, a charity organisation."