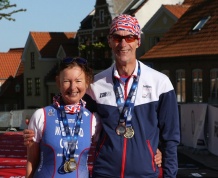 Linda and Keith with their medals

Alumni couple Linda and Keith Whitehead have both won medals for Great Britain at the European Middle Distance Duathlon Championships.

Keith (Maths, 1974) won a bronze medal in the 65-69 age category at the event in Viborg, Denmark, while Linda (Biology, 1974) took home gold in the same age group, becoming European Champion.

The middle distance duathlon featured a 10k run, a 60k bike ride and a final 10k run, which they completed between 4 and 4.5 hours.

Keith said: “Halfway round the first run Linda took a nasty tumble, losing skin from two elbows and a knee and twisting an ankle. But she doesn't give up easily!

“After she’d received her gold, the organisers broke with protocol to hold Linda back after her medal ceremony. They asked me to join her to receive mine and for some photos together, after which I had to give my medal back and then process in again with the other two medallists in my category!”

Linda and Keith took up running around 15 years ago after making a fitness pact. Then in 2007 when Keith took early retirement he began marshalling at adventure races and triathlons.

He said: “I watched competitors finishing at the London Triathlon, was struck by the obvious sense of achievement on their faces, and wanted the same experience.

“At this stage I was basically just a runner. I couldn't swim front crawl and had never owned a road bike or used cleats or drop handlebars (let alone tri bars!) I bought a cheap package that included everything I needed for my first triathlon (bike, wet-suit, tri suit, swim goggles, bike shoes and helmet) and set off on a long learning curve. In 2012 (aged 59) I did my first sprint distance triathlon and a year later Linda did her first one with me at the same event.”

Soon after Linda had a major setback. At Blenheim Triathlon, in her first event with an open water swim, she had serious problems in the water and collapsed just after getting out. She spent five days in hospital and was initially diagnosed with multiple heart attacks. However after the same thing happened on a training swim a few months later it was eventually confirmed as swim-induced pulmonary oedema. Linda’s experiences featured in a Channel 5 series called ‘Medical Mysteries’ and the ultimate diagnosis means she has been forbidden to compete in open water.

Keith said: “While Linda continued with a few pool-based triathlons, I gradually tested myself on longer and longer triathlons, eventually completing an ironman distance event in 2016 aged 63 and representing Great Britain (in my age group) at the European Middle Distance Championships in Austria the same year, finishing pretty near the back!

“Around the same time, we started to do duathlons together, again building up the distances we attempted. The longer the race, the happier we are, generally!”

Last October, Linda qualified for the Great Britain team at a race in the Midlands but Keith had to miss the event because of a broken femur six weeks earlier from a bike accident. After an operation to insert six pieces of metal in his leg he came back and managed to qualify in April this year.

He said: “So off we went to Denmark in May! I ought to stress that racing for GB in triathlon and duathlon is done in five year age bands so although all ages compete in the same race at the same time, the results are presented by age group so we're only ever compared with other oldies like ourselves. And the number of 65 year-olds who will undertake long endurance events is not large. Still, you can only compete against those who turn up!

“Linda's medal was not so much of a surprise, but mine was a complete shock because my success was simply being there after my accident. I didn't expect to be in the top three, so when my name was called out I was stunned.”

Linda and Keith are now back in training and hoping to run their second ultra-marathon later this year.