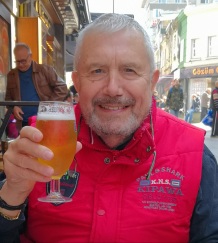 Memories from the field

Anthony ‘Tony’ Moore (Philosophy & Sociology, 1968) entered the finance sector upon leaving Exeter, and has since worked in six countries, nine cities, and conducted business in another 20+ countries around the world.

He has worked for BNP Paribas, Barclays Banks, and Goldman Sachs among others, and has recently launched Evrensel Capital Partners, a merchant bank and fund management company, based in Istanbul where he now lives.

However for Tony, like so many Exeter students, his experiences were shaped just as much by his time on the sports field as in the classroom.

“I played rugby throughout my time at Exeter and had the honour of being captain of the 1st XV in my third year. Unlike today, Exeter and St Luke’s were two different teams and by strange coincidence, an old school friend of mine from Worthing, Ian Wright, was captain of St Luke’s!

“St Luke’s were the top team back then and had several players who went on to international rugby. Ian was one of them, a great fly half who got the call up in 1971. We suffered an annual defeat at their hands from 66 to 68!

“At Exeter we still gave people a good run for their money. I was loose head prop for the three years I was there and played with some great team mates who went on to be highly successful. For example my fly half is now Sir Patrick Elias and our utility wing is now Lord Robert Owen. The captain in my first year (1965) was Mike Austin Smith a very well-known and highly successful QC and in my second year, Gareth Williams, who became a well-respected judge. And the stalwart hooker, taller than both his props, Gerry Elias has also had a very distinguished law career. Most of the rugby players seemed to come out of Kilmorie, and that was where the law students lived!

“While St Luke’s were our nearest rivals, the biggest competition were Bristol. And off the pitch there was an unofficial battle to do the most damage to each other’s clubhouses! Not vandalism though I hasten to add, it was always good-natured banter between clubs. We enjoyed playing other university teams like Bristol, Bath, Reading and Southampton and we managed to get some pretty good results.

“We also used to love playing in Cornwall. We’d get a coach to play in Redruth, Hayle, Penzance and more and then on the way back stop at the Jamaica Inn for a swift beverage or two. We’d be returning to Exeter quite late and desperate to visit our favourite curry house (we were well known and the owners would stay open if they knew we were coming), so occasionally somebody would be dispatched from the bus to sprint past the final bit of city traffic and make sure we got a table.

“I remember at one of these Cornwall matches, Bonzo Johns, Redruth's tighthead prop, picking me up by the scruff of the neck at the first scrum and saying ‘I hope we have a pleasant day sir!’. Bonzo played in the Cornish county team and was a legendary player down there, so matches like that were always good fun.

“The toughest games though were against British Royal Naval College Dartmouth, and perhaps surprisingly, Exeter Police! We referred to those as the ‘kick everything that moves above grass height’ games!

“Off the pitch the rugby team had great camaraderie and we spent a fair amount of time in the RAM at Devonshire House or in the Long Bar in the city centre. The Red Cow was another favourite haunt for an evening, where I remember you could get Scrumpy with a dash of lemonade for twopence! Once or twice after a Saturday evening out, we’d sneak over to the girls halls of residence and set the fire alarms off. It sounds very childish now but we thought it was hilarious watching all the boys jump out of windows and attempt to get away before being spotted – segregation was a big thing back then!

“I have very fond memories of my time at Exeter, and rugby has definitely stayed in my blood. There are not many England games that I miss on the TV from Istanbul. And I think it even helped me at the start of my finance career – the chap who interviewed me for my first job at Montagu Lobel was a passionate rugby fan, and he became a lot more interested in hiring me once I started regaling him with stories of past adventures!”