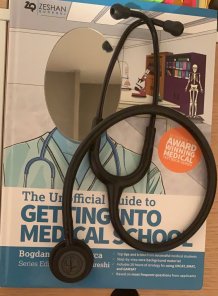 Many congratulations to our alumni authors who have recently had their books published.

This book was born from Bogdan's frustration of not getting into medical school in the first place and published just after he graduated from his degree at the University of Exeter. Medicine is arguably the most competitive university degree to apply for, with up to 20 applications per place, and that's only counting those that think they are good enough, not the 100s more that want to apply but don't know how. This book is unique in that it is based on real data from over 300 surveys and focus groups of successful medical students from over 32 medical schools, as well as live data from those currently applying for medical school, encapsulating their current anxieties and top tips (first book of its kind). The contract with the publisher of this book is not-for-profit and every penny from the sales will go towards widening access to getting into university globally.

This volume follows closely upon the heels of his leading a successful Plymouth team which won a competitive tender for the first Airbus contract with Plymouth University, which examined future space-based radar sensor requirements [2016-2018], and subsequent talks at both the Royal Society and Aeronautical Society in London. This is his 3rd Introductions book. Easy to follow and straightforward in their approach, Reeds Introductions cover the fundamental principles of maritime physics, proving a firm foundation for students prior to studying essential topics in Remote Sensing Climate Change and Maritime studies. Knowledge of electromagnetic wave-based devices and sensors is an established merchant navy requirement, particularly for the STCW qualification in Maritime and Coastguard Agency exams, as mandated by the UK Department of Transport.

The book tells the revealing story of Charlotte Brontë’s relationship with William Smith Williams who, as the Reader at her publisher Smith, Elder & Co, recognised her genius. But, who was he? William was a radical Victorian, friend to many of the giants of 19th century art and literature: Thackeray, Thomas Carlyle, Elizabeth Gaskell, George Eliot and the Rossettis. Through him we gain an insight into the world of publishing, the art and science of lithography and the controversial thinking of John Ruskin on women’s education, politics and economics.

A few years ago, Lucy Leonelli was seemingly on top of the world. She was 28 and had already been made a partner in her headhunting firm. But like lots of people living the corporate life, she’d worked so hard and buried herself so deeply into one world that she was constantly worried she was missing out on life out there. Her book charts an adventure in stepping outside of her comfort zone. Using the alphabet as the backbone to her journey, Lucy spent a year investigating 26 subcultures, from Aristocrats, Battle Re-enactors and Circus Performers to Xtreme Sport Fanatics, Yogis and 'Zeitgeist' Political Activists.

You can find out more and support the book online.

- The Reception of the Legend of Hero and Leander is a study of the literary reception of the originally Greek love-story of Hero and Leander, examining the nature of the tale and demonstrating its longevity and huge popularity from classical times to the present, in a great variety of different genres. Chapters consider the classical versions, medieval and renaissance versions in various European languages, folk and literary ballads (and even a pop song), the lyric, dramatic versions, settings to music, burlesques and travesties in all genres, modern reflections of the story in (experimental) literary forms. You can find out more about it online.

- Brian has also translated The Way Back by Erich Maria Remarque in to English. This book is the sequel to All Quiet on the Western Front, one of the most powerful novels of the First World War and a twentieth-century classic. After four gruelling years the survivors of the Great War finally make their way home. Young, spirited Ernst is one. Finding himself inexplicably returned to his childhood bedroom, restless, chafing, confused, he knows he must somehow resurrect his life. But the way back to peace is far more treacherous than he ever imagined. If All Quiet on the Western Front was a lament for a lost generation, this sequel speaks with the same resonant voice for those who came back. The book will be published in paperback on 3 Oct 2019, and you can pre-order it on Amazon now.

The book looks at how many people dream of becoming kings, queens and princesses. In reality, very few people are. As you read and colour this book, you will discover about the World’s Youngest King. His name is Omukama Oyo Nyimba Kabamba Iguru Rukidi IV who lives in Uganda. He became king when he was only 3 and a half years old. Now at 27, he rules the Great Kingdom of Tooro. Patrick hopes the book will help people to create the success they deserve.

Andrea Reece (MA Translation, 2013) has translated the first memoir in English by a Rohingya refugee called First, They Erased Our Name. A Rohingya Speaks by Habiburahman and Sophie Hansel.

First, They Erased Our Name is an urgent, moving memoir about what it feels like to be repressed in one’s own country and a refugee in others. It gives voice to the voiceless. Habiburahman was born in 1979 and raised in a small village in western Burma. When he was three years old, the country’s military leader declared that his people, the Rohingya, were not one of the 135 recognised ethnic groups that formed the eight 'national races'. He was left stateless in his own country. Since 1982, millions of Rohingya have had to flee their homes as a result of extreme prejudice and persecution. In 2016 and 2017, the government intensified the process of ethnic cleansing, and over 600,000 Rohingya people were forced to cross the border into Bangladesh. Here, for the first time, a Rohingya speaks up to expose the truth behind this global humanitarian crisis. Through the eyes of a child, we learn about the historic persecution of the Rohingya people and witness the violence Habiburahman endured throughout his life until he escaped the country in 2000, eventually reaching Australia by boat in December 2009.