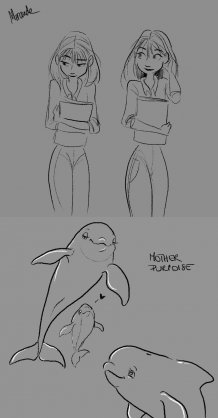 Drawings from the animation

The project, called ‘Miranda and her Plastic’, is Lottie’s first animated film and is being made in association with ArtHouse Jersey.

Lottie is aiming to raise awareness for ocean research and climate change and to raise money for the charities, Sea Legacy and Samaritans.

She has previously worked with the ‘Chasing Coral’ Netflix documentary team and hopes to join their environmental screenings and Teens4Oceans campaign.

Lottie said: “We are currently in production and at the beginning stages of animating. We also hope to start organising some beach clean ups and events to raise further money in aid of reducing plastic pollution.

If anyone is interested in getting involved, joining future events or hearing more about the project, they can take a look at the website: https://www.i90west.org/mirandaandherplastic/