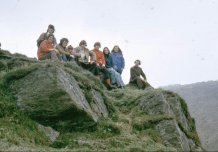 Out of Doors Society members at Cow Castle.

20 years of meetings for the Out Of Doors Society alumni

Alumni who were members of the Out of Doors Society whilst at Exeter have been meeting for 20 years, co-ordinated voluntarily by alumna Sandie Brunnen (nee Blizard) (Philosophy, 1976). We take a look at how these meetings have come about and what they’ve looked like over the last 20 years.

The Out of Doors Society was formed in 1956, making it one of the oldest societies on campus. However, the roots of the society can be traced back up to ten years before that, stemming from the outdoor pursuits of the students of the University College of the South West of England.  The society provided the opportunity for students to explore the countryside and local area, to meet like-minded individuals and to get ‘off campus’ once a week.

Sandie said that she has particularly fond memories of these walks at Exeter: “The walks I remember best are the coastal walks, fabulous views and a stream of walkers occupying the coastal path up and down as far as the eye could see.”

After attending the society’s Freshers coach trip in 1973 and signing up as a regular member afterwards Sandie was persuaded to become the secretary of the society the following year. However, her involvement with the society has continued long after her graduation through her organisation of reunions for alumni who were part of the society. This has involved choosing the itinerary, organising accommodation, and making any other arrangements necessary for 'unofficial' annual get-togethers.  In order to do this Sandie frequently tries out both the accommodation and walking beforehand.

The first reunion was an informal house party given by some of Sandie’s friends, Kathryn Lowde (nee Coward, Chemistry, 1975) and David Lowde (Chemistry, 1974 and former member of OODS), in 1999 when they moved to Malden in Essex. This was the first time several of the group (all former Exeter students) had reunited since their student days. The success of the reunion was such that the group resolved to meet again the following year in the north west of England.

Sandie said: “Two of us who attended the Essex house party live in the north west. We combined our efforts, suggested a walk in the Clwydian hills in North Wales and between us arranged to accommodate folk for the gathering in 2000.

“That decided us. The enthusiasm was such that we resolved to meet annually, a co-ordinator was needed to bring it about, I volunteered, and 20 years later we are still meeting.  Over the years, families have grown up, relationships have changed, folk have retired, and sadly a couple have died.  Partners have found us to be a friendly bunch and word has spread amongst the connected network of ex OODS friends, and our numbers have grown.  We all have in common being Exeter students during 1972 – 1976.

Sandie says that it’s a great atmosphere because “Everyone has a link to one or more members of the group.”

The group’s reunions have taken them to a great many places over their 20 years including Scotland and Wales for several 50th birthdays in 2004, Dove Dale in Derbyshire, Lulworth Cove in Dorset and this year for their 20th get together they returned to Exeter. This year’s meeting saw their greatest number of attendees with 34 joining a dinner in Reed Hall which Sandie said was “fabulous”.

Sandie’s efforts in regularly networking amongst alumni have not gone unrecognised and she’s been nominated and shortlisted in this year’s Alumni Volunteer Awards for the ‘Nicholas Bull Award for the Exceptional Support of the Alumni Community’ category. You can read more about this online.

Numbers of those attending these events are increasing and next year the group has planned to meet at Sedbergh for their 21st outing; we wish them well with their next adventure! 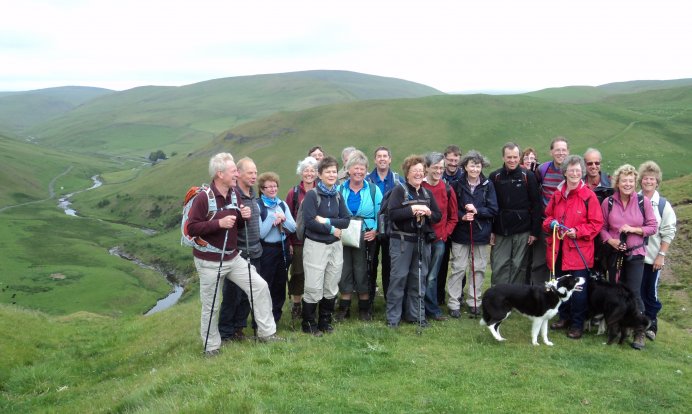 The Group pose for a photo during the alumni reunion in 2011 when they visited Northumberland. 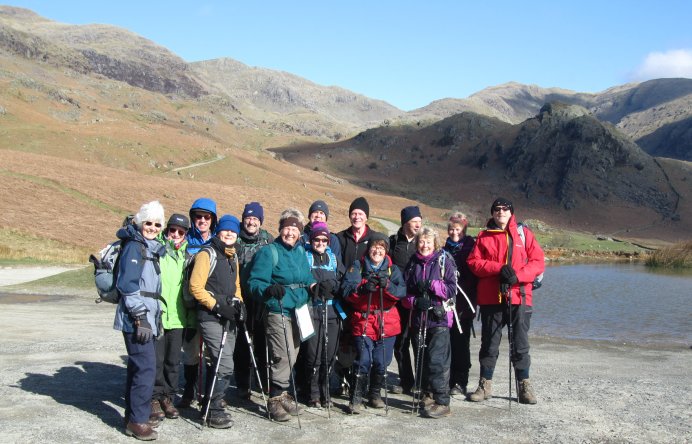 The Out of Doors Society 2016 reunion was held in Coniston, in the Lake District and resulted in some great
lakeside pictures like the one above. 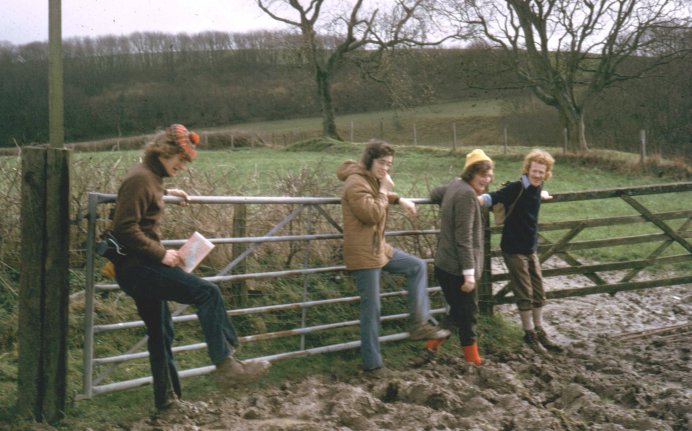 Some of the initial walks of the Out of Doors society were held in very muddy conditions!

When the Out of Doors Society held their alumni reunion in Exeter this year they had a great walk on Dartmoor and
can be seen stopping for a well-earned lunch break and rest in the picture above.