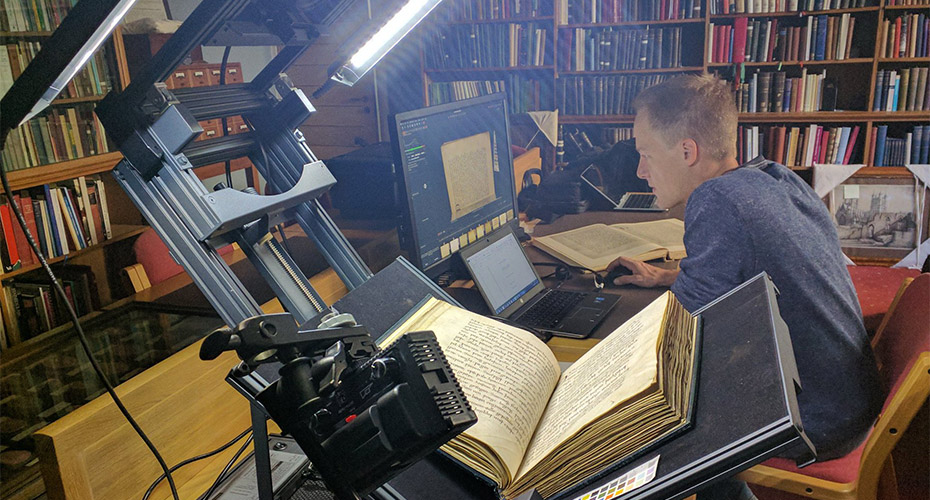 The process of digitising the Exeter Book 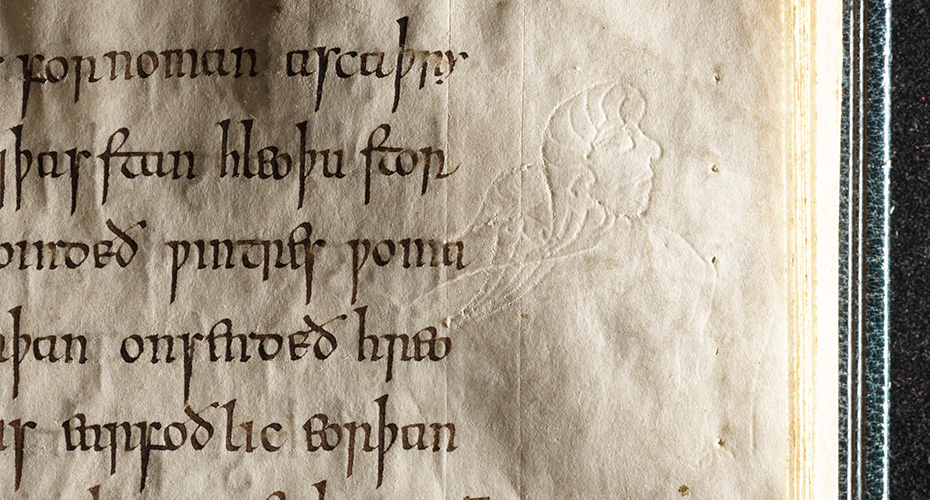 A drypoint illustration in the margin of folio 78 (recto) 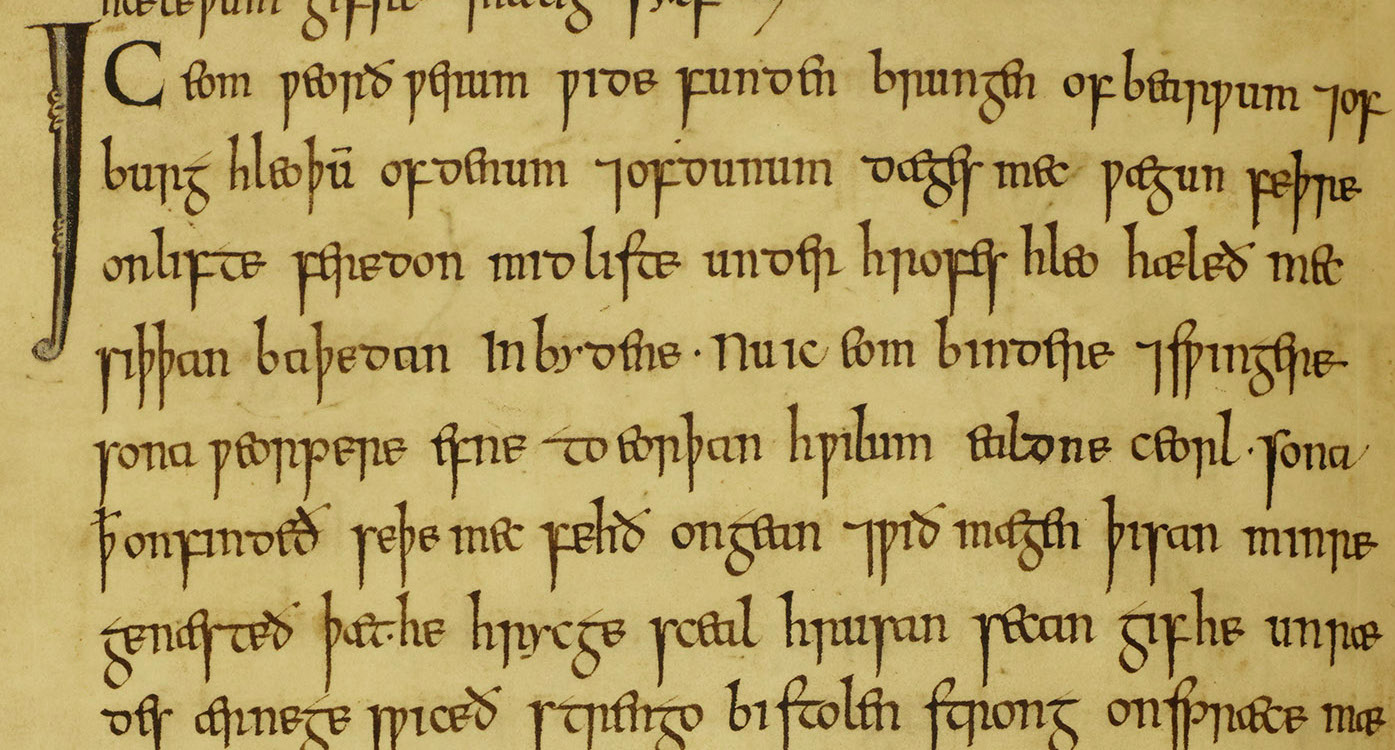 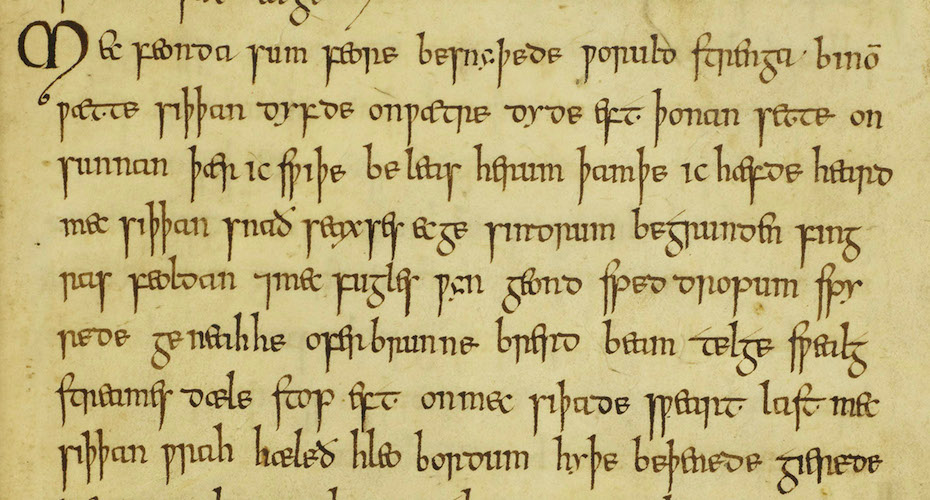 The Exeter Book Project brings together the University of Exeter and Exeter Cathedral, with the shared aim of curating our cultural heritage for today and the long-term future.

In 2016, UNESCO added the Exeter Book to its Memory of the World Register of artefacts of global cultural significance. It is one of only four surviving manuscripts of Old English poetry and most likely the oldest of these, meaning it has a strong claim to be the oldest surviving book of English poetry in the world. The Book has been in Exeter since at least the 11th century, being donated to the Cathedral by Bishop Leofric on his death in 1072, where it has been kept and cared for continuously ever since. Its riddles are virtually all those which survive in Old English. Many of them have bawdy double meanings and some still remain unsolved to this day. The Riddle Sculpture by Michael Fairfax, which stands in Exeter’s High Street, incorporates some of the Book’s riddles. Its poems and elegies such as the Wanderer and the Seafarer are among its best known compositions, and have inspired writers from Ezra Pound to J. R. R. Tolkien.

The Book bears the marks of its past and appears to have had many varied uses over the years, including being used to press gold and silver leaf, used as a chopping board, and suffering a spill from a glue pot.

The Exeter Book is a cultural artefact that matters to us all – in the city, the region, and the wider world – and the Cathedral and the University are determined to make it accessible for all, using the latest technology.

The project will deliver a complete digital copy of the Exeter Book. The Book comprises of 123 written leaves, which readers can view in exceptionally high resolution. They will be able to see in close-up how this ancient book was made from animal skins, written on by hand in the Old English language of the Anglo-Saxons, and then decorated with uninked drypoint images inscribed into some of the margins.

The site will also guide users through the world of the Exeter Book, the rich variety of themes treated in the array of poems and riddles, which tell us so much about the outlook of the Anglo-Saxons, their knowledge of the world, the strange lands and fantastic beasts beyond their own shores, their values, religious beliefs and even their (often quite edgy) sense of humour.

In creating these resources, the project team will be drawing on the expertise of a wide range of researchers in literature and history from Exeter and its partner universities as well as the digital specialists based in the University’s Digital Humanities Lab.

The project has been pump-primed by the generous support of the University Provost’s Fund.

The Exeter Book can now be freely browsed on the completed digital platform.

Read more about the Exeter Book