Skip to main content
Alumni and supportersExeter in the late 80s

"'89, don't turn back the clock…" Remembering Exeter University in the late 1980s 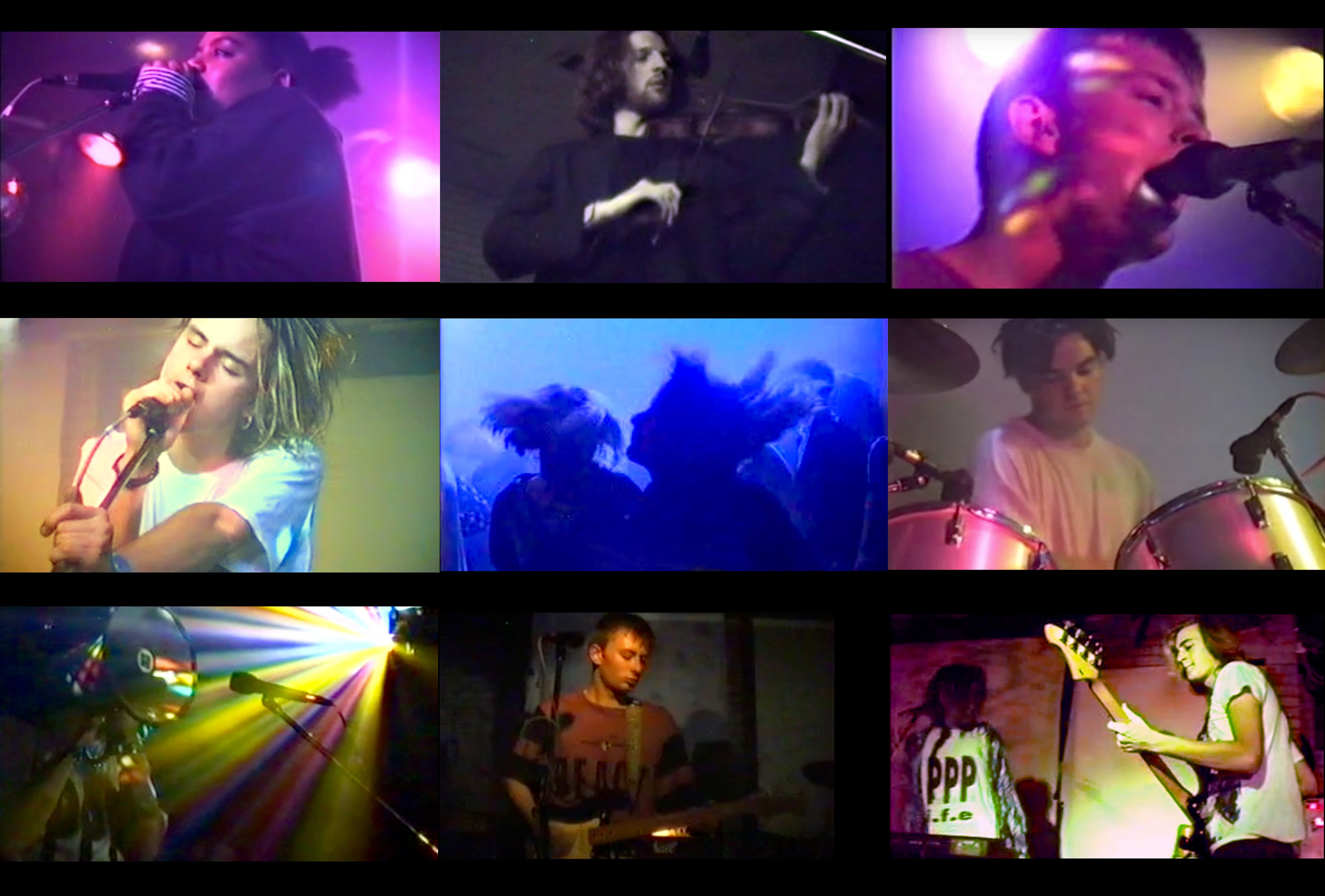 Alumnus Shaun McCrindle (English Literature and Fine Art, 1991) had a particularly creative experience during his student days at Exeter, combining art with literature and a good helping of music on the side.

As a contemporary of Radiohead frontman Thom Yorke, and electronic musician and producer Matthew Herbert, Shaun had a unique view of the burgeoning music scene of the late 80s and early 90s. Some of his early recordings of Thom Yorke’s band Headless Chickens playing on campus have proved popular on YouTube and generated further interest in the music of the time.

He’s now a songwriter, musician and teacher living in Bristol. We spoke to him about his time at Exeter and how the experience shaped his life post-graduation.

What made you choose Exeter?

I only visited the top two prospective universities on my UCAS list: UCL (Slade School of Fine Art) and Exeter. I didn’t want to give up studying English Literature, alongside Art, so I asked if Exeter would accept me at my interview, there and then, as I didn’t want to travel to any other universities. Luckily, I already had the grades I needed and English lecturer Chris Brooks (R.I.P.) and Fine Art course leader Nick Gray said ‘Yes!’

I’m originally from Essex but I’ve always loved the West Country and I never returned to live in the Home Counties after I became a student at Exeter.

How did you find life on campus back then?

For Combined Honours students like myself, it was campuses: the University’s main campus at Streatham and the Art College, on Earl Richards Road North (off the Topsham Road). So, for students on this course - there were about a dozen in my year - we’d commute between campuses. A lot of cycling between sites was involved as the two campuses were on opposite sides of the city! The Art College sadly closed during the 1990s, when the Art Department moved to Plymouth University.

There were some inspirational lecturers at the university: the late Chris Brooks’ lectures on Dickens were particularly memorable, as Professor Brooks would adopt the various characters’ mannerisms and accents as he read out passages from the novels, bringing the fiction to life. Professor Michael Brooks was another lovable maverick in the English Department at the time, whose informal teaching style invited interest and curiosity. In one lecture on the ‘Beggar’s Opera’ he played a number of recordings by different artists of The Threepenny Opera song, Mack the Knife, just because he liked the music, I think! (His enthusiasm inspired me to donate my vinyl copy of the Psychedelic Furs’ version of Mack the Knife to him afterwards!). Michael - and his wife - were very entertaining off-campus too: at the end of the degree course they hosted a massive barbecue and shambolic football match at their huge house in Starcross, which was a fitting celebration to end our studies on.

Some of the younger English lecturers were excellent too: the intellectually effervescent Dr Linda Williams and the charmingly Scottish Dr Dermot Cavanagh, both fresh from their PhD studies and only a few years older than us, really 'connected' with the students during their seminars. There were inspirational lecturers at the art college too (Sam Smiles, Mike Smith, Dave Hilton, Chris Garratt and Jeremy Diggle among them) but learning at the art college was more self-directed: you asked for help when you needed it and often talked to technicians rather than lecturers when it was required. One of the best things about the art college, though, was its proximity to the Double Locks pub, where you could drink ‘Old Roger’ or ‘Old Bastard’ ales (no longer served) and where I acquired a lifelong taste for Stilton cheese and bar billiards! 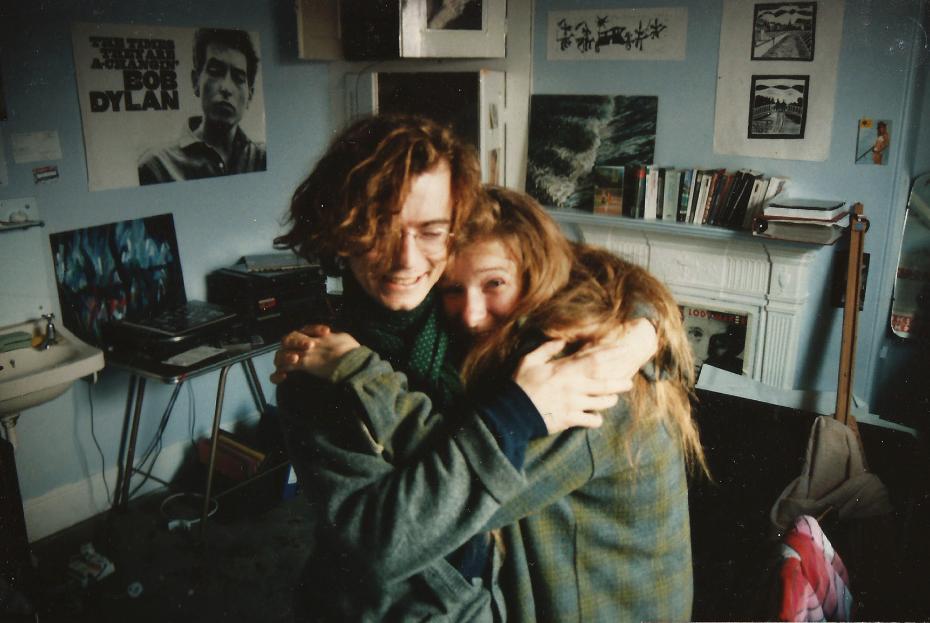 You obviously filmed Thom at the Lemon Grove. Do you have any other favourite gigs from that time?

I never had much money at university so I didn’t go to a lot of gigs. However, I remember seeing the bands Loop and Curve at the Lemon Grove. I remember Thom Yorke took his t-shirt off for the Curve bass-player, Debbie Smith (later of Echobelly), to sign at the end of the gig, as he didn’t have any paper handy for an autograph! However, the most outstanding and surprising gig I saw at ‘The Lemmie’, as it was known, was when American hard-core band Fugazi played there, delivering a performance of furious energy, deep commitment, political advocacy and melodic intensity: it’s the only gig I’ve been to where the ‘merchandise’ consisted mostly of anarcho-feminist literature!

When you were filming, did you have any idea what Thom might go on to?

Oh yes, I think so! Thom and I shared a house at 91 Longbrook Street, next to a dentist’s, along with four other Combined Honours students and a Politics student. Thom was always playing guitar or listening to music in the house. He was active in a band back at home in Oxford (On a Friday who later became Radiohead) and also busy with Headless Chickens – or ‘Headless’, as they were known - in Exeter. He also DJ-d at The Lemmie every Friday night (he might still have my copy of ‘Start!’ by The Jam!) so he was pretty obsessed with music!

Reflecting the spirit of the times (‘Madchester’, the Hacienda and the emerging ‘Rave’ culture) Thom had broad musical tastes which embraced dance music as well as guitar music. This mixture of styles can clearly be seen in the Headless concert footage, where Thom collaborated with music student Simon ‘Shack’ Shackleton and physics student and gifted violinist John Matthias, who were both in the year above us, to produce a very diverse set of songs. All three students were also involved in the three-day Contemporary Music festival, which took place at the university in February 1991. As part of the Exeter Music Theatre Co-operative, they performed several pieces, two of which I filmed (these can be watched online). 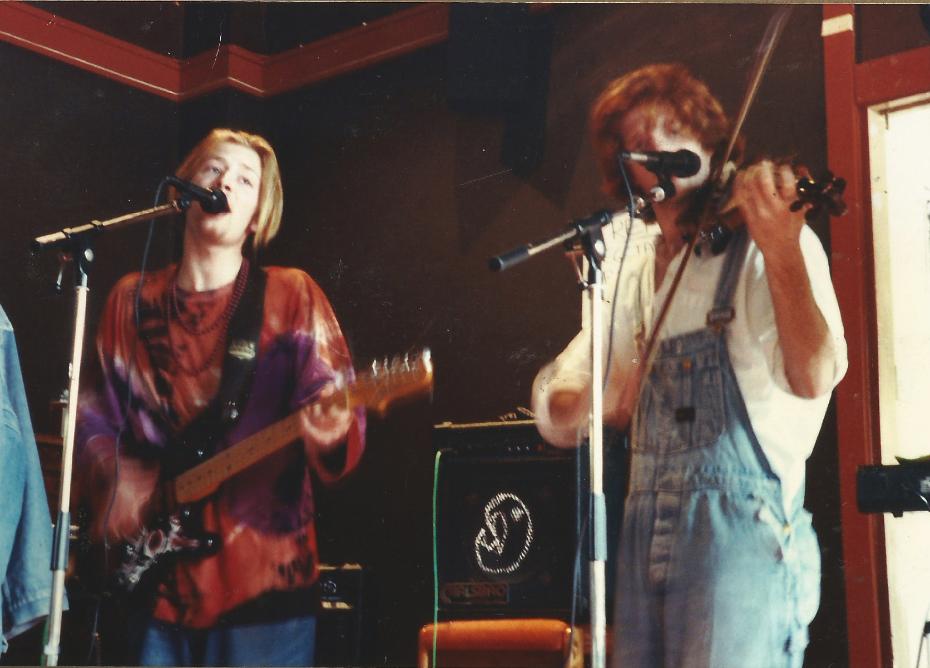 I think we all knew Thom was destined to become a serious musician and re-watching the Headless footage now, it’s clear that he had all the ideas and talent he needed to pursue this ambition (High and Dry, of course – performed here at the Headless show in an early uptempo version – was to become a future Radiohead ‘classic’, five years after this show). Though Thom did go on to become a serious and celebrated musician – on the back of 'Generation X' anthem Creep - it’s great to watch him having such a lot of fun on stage during this concert!

Did you play in a band yourself at University?

I didn’t play in a band at Exeter – I found I was always too busy with the course! But I wrote and recorded music at home during the holidays, with an old school friend called Patrick Bell, and I used some of these recordings in the videos I made for the Fine Art course. One of these recordings was a track entitled Exminster Grind, which came from a jam Thom and I had during our first year, when he was living in Hope Hall. Thom’s original jammed lyric for the Exminster Grind chorus was “Baby, let’s grind”, which probably owed a little to Prince’s song Darling Nikki. I changed the lyric when I made the recording with Patrick to suit a film I’d made about Exminster Hospital, an abandoned and derelict mental asylum I got permission to film in during the course. You can still watch the Exminster Grind video and you can now also live in Exminster Hospital, if the fancy takes you! The hospital has since become a housing development called Devington Park and there is a website where you can find out all about its surprising history!

What did you do after Exeter and how did you get into songwriting as a career?

Ha! Ha! I don’t have a songwriting career as such but I do write a lot of songs and I have two bands I perform with in Bristol: Glass Angel and Rock n Roll Angels.

Since moving to Bristol in 1991 I’ve played in lots of different bands, including cult Bristol band The Blue Aeroplanes. I’ve also had the pleasure of collaborating with John Matthias on a number of musical projects, including his album Smalltown Shining, which was released by the record label of fellow Exeter alumnus, Matthew Herbert, and I’ve written and recorded four self-released albums.

I also trained as an art teacher, which I practised in the further education sector, for eleven years. I got married (to another Exeter graduate, whom I met at a Radiohead gig in Bristol!), worked part-time and looked after my three children during their pre-school years and completed a Masters in Songwriting, at Bath Spa University. I currently work in a school in Bristol, as a Cover Supervisor and continue working with my band(s) in my spare time. Apart from becoming an adult with responsibilities, many of my core values remain similar to those I held (and formed) whilst a student at Exeter.

My son is now the age I was when I started at Exeter but he has no urge to go into higher education. I was the first in my family to go to university and I think it’s really sad how students now have such a ‘tax’ on their educational prospects. I couldn’t have gone to university without the aid of a full grant, so I sympathise with students who face that challenge now.

My abiding impression of life as a student at Exeter was one of great creative potential and intellectual stimulation. I met some really interesting people from a diverse range of privileged backgrounds (and a few from state comprehensive schools, like myself)! It was a safe environment to take creative risks in and a fertile one to meet like-minded people in, too. I made some lifelong friends and I would love it if my own children had the confidence to go to university and have a similarly life-changing experience. 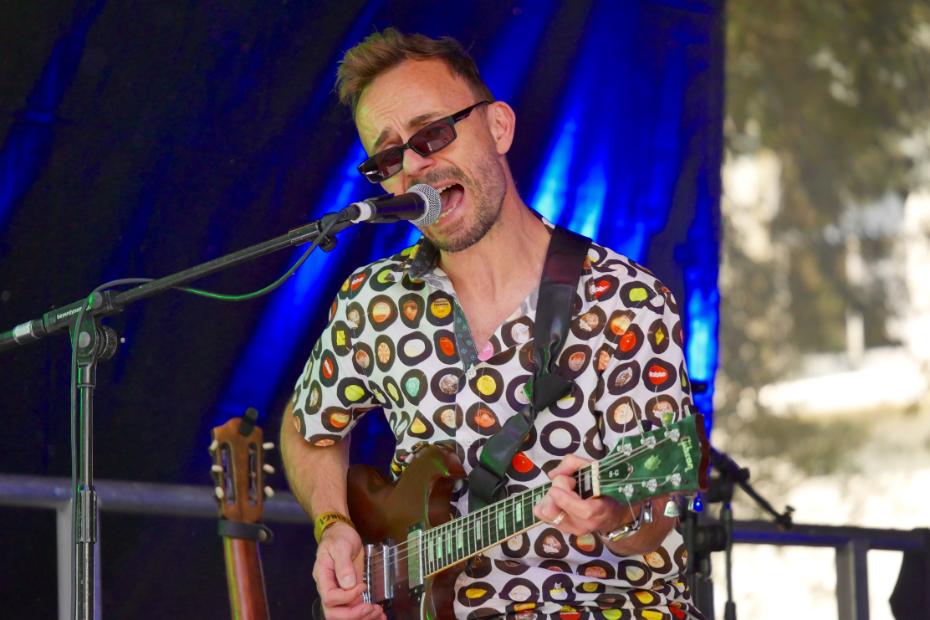 You can watch Shaun’s recordings from the Lemon Grove and the Contemporary Music Festival via his YouTube channel: www.youtube.com/shaunmccrindle