My Graduation Day was on Thursday 29 June 1972, when I graduated with a BA Hons degree in French under my maiden name of Heather Godber. The ceremony was held in the Great Hall and present was the newly-appointed Chancellor, Viscount Amery. In the audience to witness my graduation were my parents and my younger brother, who had travelled to Exeter from Harlow, Essex. I remember very little about the actual degree presentation, other than I had to walk up some steps onto the stage, walk across it to someone (was it the Chancellor?) who handed me a cardboard roll which contained my degree certificate and shook my hand. It was all over so quickly.

The University was much smaller then than it is now (about 3,000 students, I think) and all the Faculty of Arts degrees were presented in the morning. I don't suppose that would be possible now.

I remember there was some sort of departmental reception after the graduation ceremony when my parents met Professor Robert Niklaus, Head of the French and Italian department. I think there were strawberries and cream on offer at that reception, although I can't swear to it. In the evening, I went with my family with another French graduate and her parents for a celebratory meal at The Ship Inn, Exeter.  That was a very special event as there wasn't a lot of money around in those days for eating out.

The music scene at the university was very good and I took the opportunity to go and see several bands. These have recently been referred to in an alumni newsletter. I became aware of Principal Edwards Magic Theatre, many members of which were Exeter students and I remember regularly seeing them around the campus. I attach a photo of an article from the Exeter Express & Echo dated 30 January 1969 reporting that the band had just signed for John Peel's Dandelion Records, and John Peel is with the band in the photo that accompanies the article.

I don't know if such a thing still exists, but the students at Exeter used to organise an annual Rag Day on which they would dress up in silly costumes and go round Exeter City Centre, collecting money for charity. In my first year I was accommodated in Jesse Montgomery House, one of the Duryard Halls of residence (which I believe no longer exist). We decided to put together a float on the theme of Alice in Wonderland and I was dressed as Tweedle Dum. The float was to take part in the Rag procession on Saturday 15 February 1969 through the city. We had such a lot of fun preparing for it and then taking part in the procession. The following day we had the Rag Ball, when we dressed up in more silly costumes. Included are some photos of the Rag events. One of them is of a number of male students from Raddon House, Birks Halls, parading in the procession as drum majorettes. Another is of me and three other female students dressed in our costumes for the Rag Ball. I hope we raised lots of money, but I have no idea how much.

1968 was quite a turbulent year from a political point of view - there had been the French student riots in Paris, for starters. In the April, Enoch Powell had delivered his controversial 'Rivers of Blood' speech about immigration. On 23 October 1968, Enoch Powell came to Exeter University at the invitation of the university Conservative Society to deliver a speech on economics in the Great Hall. The hall was absolutely packed and I was in the audience. The majority of the students hadn't attended to hear about economics; they'd gone to protest about Enoch Powell's racist comments about immigrants. The two things I remember about the occasion were the tremendous noise from the students' heckling and a barrage of paper aeroplanes directed at the stage.  In the end, it was impossible for Mr Powell to continue and he left.

The other political occasion I recall was in the Autumn term of 1971 when Margaret Thatcher was Secretary of State for Education under Prime Minister Edward Heath. She decided to stop free school milk for junior school children, which earned her the soubriquet 'Margaret Thatcher, Milk Snatcher'. Some Exeter University student organisation arranged a protest march on campus, which I participated in. We carried placards and chanted anti-Margaret Thatcher slogans. This had absolutely no impact whatsoever, but it made us feel we were trying to do something about the situation. 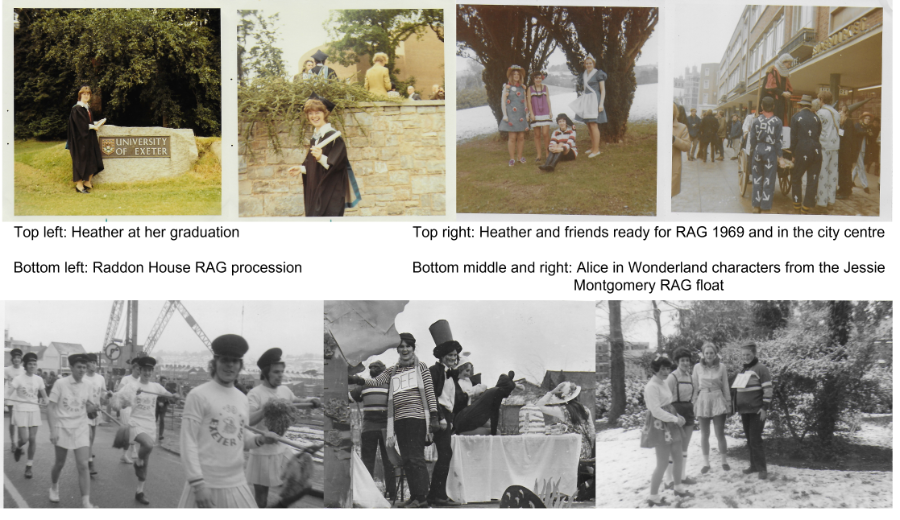