Skip to main content
Our expertiseCase studies - What metamaterials can do for you!Case study 5 - Fighting cancer with Terahertz radiation

On average, every 2 minutes one woman is diagnosed with breast cancer in the US alone1. However, the 5-year survival rate of women with breast cancer is 90%, and increases to 99% when the cancer is treated before it spreads1. This highlights the importance of early detection and treatment.

The most common treatment is surgery to remove the tumour, which involves the removal of all visible tumour tissue, plus a small margin of healthy tissue. The width of this margin is extremely important for preventing local recurrence of cancer2, but is not straightforward to measure. If, after the surgery, the margin is found to be too thin, patients may need to be called back for subsequent operations, causing additional emotional and financial stress.

Our idea is to use terahertz (THz) radiation to measure the thickness of the tissue margin around a tumour straight after it has been removed. For breast cancer, this healthy tissue is predominantly fat based, and measurement should be possible as fat is transparent to THz waves, while protein is not, as seen in Figure 1. This fast measurement would allow extra tissue to be removed at the time if necessary, and reduce the need for multiple surgeries. To do this, we have developed a way to quickly and conveniently collect a 3D THz image of a tumour using a dynamic metamaterial. 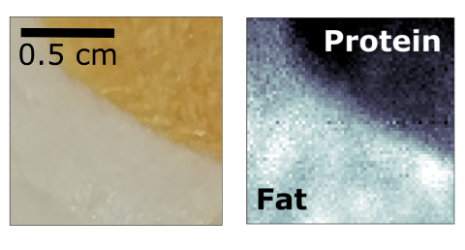 Why use a metamaterial?

To obtain sufficient resolution, we need to record the THz radiation very close to the cancerous tissue, using the geometry illustrated in Figure 2.  This geometry allows a form of superresolution imaging3, where image detail can break the diffraction limit by orders of magnitude, and allows us to measure sub-mm features in inhomogeneous tissues. 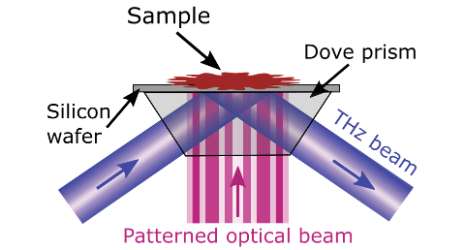 This means that arrays of detectors (like those found in digital cameras) are not suitable. Instead we use a single pixel along with a silicon wafer to make a dynamic THz metamaterial mask, where shining light on the silicon makes it behave like a metal4. Patterning the light by using a reconfigurable array of small mirrors (a digital micro-mirror device) means that we can create regions of the silicon that are metallic and regions that are not. This dynamic metamaterial allows us to record many pixels simultaneously, increasing the signal by orders of magnitude and allowing us to collect clearer images much faster than with conventional raster scanning5. This is clear in the comparison of THz images of a circuit baord in Figure 3. 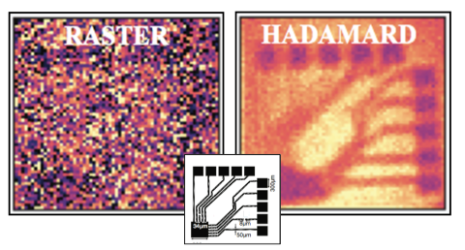