How the mystery of the missing oystercatcher tag was finally solved

Exeter researchers will soon be able to redeploy an electronic tag used to monitor migrating oystercatchers, which went missing on Orkney before mysteriously transmitting signals from a campsite, tourist attractions and a pizza restaurant.

A holiday-maker who innocently picked up the tag and took it back to his home in West London, sparking a nation-wide appeal, has come forward and made arrangements for the GPS tracker’s safe return.

The tags, which look like tiny plastic bricks powered by a minute solar panel, are superglued to the oystercatchers and are designed to fall off in the spring.

The GPS device was one of 32 attached to birds in County Dublin as part of a conservation scheme with the local council.

‌"They're really interested in how best to conserve those birds, and which habitats they need to put most effort into preserving,” explained Professor Stuart Bearhop, Professor of Animal Ecology at the University of Exeter.

"So it's really focused on what's happening in Dublin, but we end up with birds in Iceland, the Faroes, Shetland, Skye and a few other places."

‌West London resident Mike German said that he found the tracker near a fencepost on the Scottish island of Sanday during a three-week holiday to Orkney with two friends.

“l just thought it was something that had dropped off a boat's buoy or something. I never thought it was a tracker. I picked it up and put it in my pocket, then in my little bag with the shells I'd picked up from the beach," he told BBC Radio Orkney.

The researchers meanwhile continued to track the device and noticed a pattern of unusual behaviour as it travelled to a campsite, a pizza restaurant, Edinburgh and Heathrow airports before settling on a residential street in Ealing, West London.

Steph Trapp (pictured below), a PhD student who is carrying out the research, said the team thought a holiday-maker had picked the tag up and taken it home, and managed to track it down to within a couple of houses in Ealing.

"It felt a little bit strange being able to track their whole holiday, but the tags are programmed to record a pretty accurate GPS location every couple of hours," she said.

A local Ealing resident, who had heard about the story from BBC Radio 5Live, then contacted the researchers and offered to help out by delivering leaflets to homes in the right area.

"Really quickly my supervisor got an email from the guy who has the tag, saying that he was the one who'd picked it up. He's going to get it back to us," Steph said. 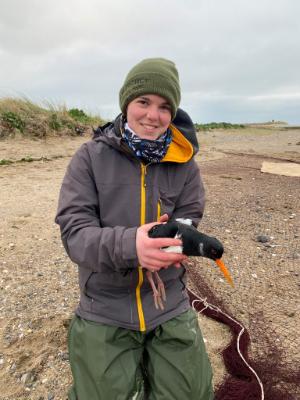 As the tags are worth £1,000 each it puts a limit on how many researchers are able to deploy, and Steph explains the more they get back the more birds can be tagged to collect data from next season, "which will ultimately lead to more effective conservation".

"The main focus is how the birds are using urban habitats like amenity grassland, playing fields and public parks, because at high tide their normal coastal and estuarine foraging habitats are covered in water which forces them up onto terrestrial sites," she said.

"Their coastal habitats are protected as part of the Dublin Bay Biosphere reserve, but the urban parks and sports pitches aren't, so the council are keen to identify which sites are most important to these birds so they can give them proper protection.

“Any tags we can get back will be really valuable for increasing our sample size and the amount of data we can collect."