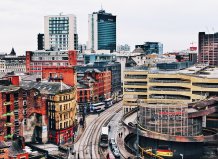 The Manchester Arena boming took place on 22 May 2017

Terrorism became a more important issue for voters during the 2017 General Election because of the Manchester bombing, a new study shows.

Security became as pressing an issue as Brexit during the campaign after the attack in the Manchester Arena, data shows.

Before the bombing 40 per cent of those who took part in a survey named some aspect of the EU or Brexit as the most important issue facing the country; 12 per cent answered terrorism, security, or the securitized issue of immigration. After the Manchester bombing, the proportion of respondents identifying Europe as the most important issue fell to 26 per cent, while 33 per cent named terrorism or related issues.

Researchers cannot be sure this was a consequence of Manchester, but people living hear to Manchester (or London) were most likely to identify terrorism as the most important issue only after the bombing.

The paper, published in the journal Political Psychology, was written by Professor Dan Stevens and Professor Susan Banducci from the University of Exeter. They collected data during the 2017 general election in Britain. People were surveyed, as part of the British Election Study (BES) panel between May 5, 2017 and ended on June 7, 2017, the day before polling. Around 1,000 people were interviewed each day of the campaign. Of 34,464 interviews, 16,411 took place after the attack on May 22.

The data shows those with more authoritarian views were more likely to be dissatisfied with established political parties and their leaders and perceptions of “belief diversity”. Those with more liberal views responded with more right-wing and illiberal preferences to heightened physical and personal threat, such as from terrorism.

They found those who have more liberal views expressed more conservative attitudes in response to a terrorist attack.

Academics measured the relationship between a respondent’s distance from Manchester, or London if interviewed after the June 3 attack, and how important terrorism as an issue was to them. Proximity to Manchester and London made no difference before the attacks but was associated with a greater likelihood to identity terrorism as the most important issue after.

Researchers found a significant association between how concerned people were about their family member being the victim of a future terrorist attack in Britain and the probably of them identifying terrorism as the most important issue. If they answered “not at all concerned” to this question was close to zero, whereas it was up to 16 times greater for a respondent who was “very concerned” about the personal threat of terrorism.

People were more likely to say they were worried about terrorism when they thought the government’s policy performance was worsening and would be little different if the opposition party was in power, as well as with dissatisfaction with democracy in the United Kingdom.

Professor Banducci said: “We found people with more authoritarian views were more likely than liberals to identify terrorism as the most important issue facing the country before the Manchester bombing. This gap more than doubled afterwards. Although perceptions of terrorist threat increased for everyone, the impact of the Manchester bombing was greatest for those with the most authoritarian views.”

Professor Stevens said: “This research suggests those with libertarian views react to physical threats such as terrorism by shifting to become more conservative, narrowing the gap between them and those with more authoritarian views. This is despite the fact that authoritarians are more likely to identify terrorism as a threat and that their perceptions of terrorist threat increase most after an attack.”