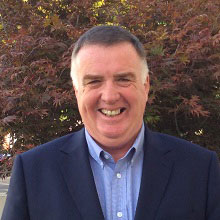 Richard Atkins became a member of Ccouncil at the University of Exeter in 2016, and a Pro Chancellor in 2017. He currently Chairs the Remuneration Committee, is a member of the Finance and Nominations committees, and is the dual assurance lead within council for education.

Richard’s professional career has been in further education skills. He was a teacher, leader, principal and chief executive in various further education colleges for forty years, before becoming the Further Education Commissioner for England between 2016 and 2021. For fourteen years Richard was Principal of Exeter College, during which time the college developed strong positive partnerships with the University, local schools, councils and businesses. Exeter College was judged as outstanding by Ofsted during this period, and continues to be one of the country’s highest performing further education and sixth form colleges.

As FE Commissioner Richard had responsibilities for advising Ministers and civil servants on matters regarding quality improvements, governance and leadership and institutional sustainability in colleges. He was awarded a CBE in 2016 and a knighthood in the 2021 New Year’s Honours.

Richard lives in Exeter and was made a freeman of the City in 2016. He is proud of the city and its world class university.