Tracing the physics of the interstellar medium with evolved dust grains, Physics and Astronomy – PhD (Funded by STFC) Ref: 3817

The University of Exeter’s College of Engineering, Mathematics and Physical Sciences is inviting applications for a fully-funded PhD studentship to commence in September 2020 or as soon as possible thereafter.  For eligible students the studentship will cover UK/EU/Intenational tuition fees plus an annual tax-free stipend of at least £15,009 for 3.5 years full-time, or pro rata for part-time study.  The student would be based in the College of Engineering, Mathematics and Physical Sciences at the Streatham Campus in Exeter.

Project Description:
The dust grains are submicron solid particles that are present in the interstellar matter (ISM) of any galaxy and play an important role in its physics and chemistry. Grains absorb stellar radiation and re-emit it in the infrared wavelength. Dust emission traces the distribution of interstellar gas well, providing the major tool to study dense gas component and how it evolves to form new stars. Gas densities and star formation rates estimated by this method strongly depend on the interstellar grain properties, which are commonly assumed to be standard and fixed.

However, a growing number of observations indicate that grain populations differ not only from one galaxy to another, but also within one galaxy. These variations are attributed to the dust evolution under local interstellar gas conditions spreading over several orders of magnitude in temperatures and densities. It has only recently become possible to model dust evolution in an inhomogeneous, turbulent interstellar medium by implementing the main grain destruction and formation processes in numerical hydrodynamic simulations of galaxies (Zhukovska et al. 2016, 2018). These state-of-the-art simulations reveal substantial variations in dust abundances relative to gas, which are expected to affect the conversion of dust emission into observed characteristics of the ISM.

This project aims to link numerical studies of dust evolution with observations of interstellar extinction and emission by dust grains and improve accuracy of interstellar dust as a tracer of the ISM physics. The student will employ radiative transfer code TORUS, developed in the Exeter Astrophysics group, to generate the spectral energy distribution and dust emission maps for the spatial galactic dust distributions from recent and ongoing simulations. The synthetic spectra will be compared with observations from recent space missions (Spitzer, Herschel, Planck) and used to make predictions for the James Webb Space Telescope, the major infrared space mission for the next decade (launch in 2021). Another direction of the project is to investigate extinction of stellar light by interstellar dust in our galaxy. Three-dimensional maps of the interstellar extinction for evolving dust distributions from simulations can be used to address the puzzling galactic scale variations of extinction detected by recent surveys.

Skills:
The project will involve working with numerical simulations and radiative transfer codes, so having experience with programming is beneficial. It will also offer the opportunity to collaborate with observers, including international collaborations, and with lab astrophysicists. 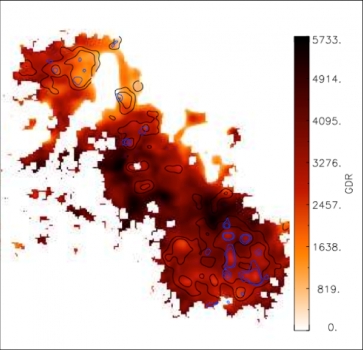 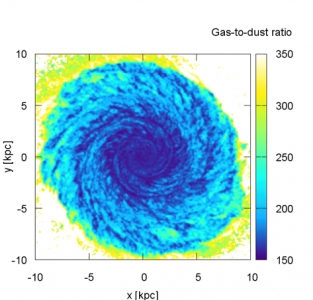 Figure caption. The gas-to-dust mass ratio maps in a Milky-Way-like galaxy from a hydrodynamic simulation run by Dr. Svitlana Zhukovska (left panel) and in the Small Magellanic (right panel) taken from work by Roman-Duval et al. (2014). The maps indicate large variations of the dust abundances relatively to the gas in both galaxies.

The award will cover the tuition fees in full, plus at least £15,009 per year tax-free stipend. The studentship will be awarded on the basis of merit for 3.5 years of full-time study to commence in September 2020.

Applicants for this studentship must have obtained, or be about to obtain, a First or Upper Second Class UK Honours degree, or the equivalent qualifications gained outside the UK, in an appropriate area of science or technology.

If English is not your first language you will need to have achieved at least 6.0 in IELTS and no less than 6.0 in any section by the start of the project.  Alternative tests may be acceptable (see http://www.exeter.ac.uk/postgraduate/apply/english/).

In the application process you will be asked to upload several documents.
• CV
• Letter of application (outlining your academic interests, prior research experience and reasons for wishing to undertake the project).
• Transcript(s) giving full details of subjects studied and grades/marks obtained (this should be an interim transcript if you are still studying)
• Two references from referees familiar with your academic work. Please ask your referees to email the reference direct to stemm-pgr-admissions@exeter.ac.uk quoting the studentship reference number, or upload them with your application.
• If you are not a national of a majority English-speaking country you will need to submit evidence of your proficiency in English.

The closing date for applications is midnight on 27th January 2020.  Interviews will likely be held the end of February or beginning of March.