Our ‘Women of Influence’ series engages a mix of guests internal and external to the University, co-chaired by the Provost Professor Janice Kay and Director of HR Imelda Rogers and run by the Equality, Diversity and Inclusion (EDI) team. The series hosts a guest speaker event termly, featuring a keynote followed by a full Q&A session. The underlying theme of these events is focused on inspiring women and supporting their career development, and all women from across the University community are encouraged to get involved.
Our next event is taking place on Monday 7th March, 12:00 - 13:00 in celebration of International Women's Day. We are delighted to be hosting alumna and Council member Amoetsoe Mkwena, Associate at Hogan Lovells International LLP in London. For more information and ticket registration, please visit the Eventbrite page here or contact the EDI team. 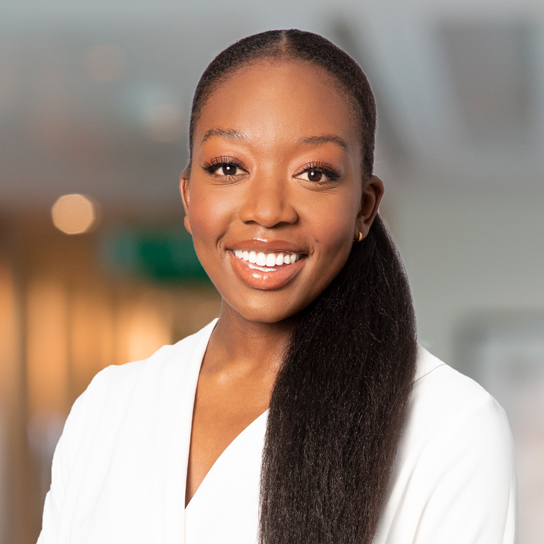 Ciara Eastell OBE runs her own consultancy company, supporting organisations – large and small – on transformation and organisation development initiatives. She is currently working at Tate on a range of culture change initiatives. She also works as a Professor of Practice at the University of Exeter, supporting the Business School to connect with the arts and cultural sector around research, teaching and executive education.

Ciara has built her professional career over the past 25 years in the libraries sector. She worked for 10 years in Devon, leading the library service through enormous change as a result of the changing needs of local communities and the impact of austerity. This culminated in the establishment of Libraries Unlimited in 2016, a nationally renowned charity working across Devon to deliver high quality and modern library services at the heart of local communities. Ciara led the establishment and start up phase for the first three years of Libraries Unlimited’s lifetime, during which time the organisation successfully gained National Portfolio Organisation status and secured the contract to run Torbay’s library service.

A record-breaking polar explorer and a renowned international speaker, Ann Daniels is the first woman in history, along with expedition teammate Caroline Hamilton, to reach the North and South Poles as part of all women teams.Ann is a great believer in living life to the full and taking opportunities as they appear. Not letting the fear of failure stop her having a go, with no previous outdoor experience and as a mother of 18 month old triplets, Lucy, Joseph and Rachel, she beat off fierce competition from over 200 other women on a tough Dartmoor selection weekend and was chosen to join the first team, of the McVities Penguin Polar Relay. A unique relay expedition of women sledge hauling to the North Pole. The first team of four women with two guides were tasked with crossing the toughest sections of ice, in the coldest weather, to give this record breaking expedition the best possible start.This unique expedition was the start of a number of world record breaking expeditions that would see Ann rise in the field of Polar Exploration.

Former Parliamentary Standards Commissioner Elizabeth has carried major roles in both the private and public sectors. She currently combines chairing The Employers’ Initiative on Domestic Abuse, TecSOS and The Independent Advisory Board, Marston Holdings with a non-executive directorship at Driver Group plc.  She also serves on the Vodafone Trust.

Elizabeth was Chief Executive of Citizens Advice, The Revenue Adjudicator, The Independent Advisor to the Metropolitan Police Service (MPS) on the relationship between the media and the police. She was Deputy Chief Executive at the London Docklands Development Authority after promotion from her role as Director of Community Services, and was responsible for delivering a major housing programme and a range of services including schools, colleges and health centres.

Elizabeth has been the non-executive chair of Annington Homes, a non-executive director of Britannia Building Society, HBS, Logica, Jarvis and Hay Management Consultants and an Audit Commissioner. A recording of this event is available to Women of Influence network members. If you would like to join the network, please email the EDI team.

Vice-Chancellor and Chief Executive Professor Lisa Roberts joined the University in September 2020. Prior to this, Professor Roberts was Deputy Vice-Chancellor: Research and Innovation at the University of Leeds where she led on the development of the University’s research and innovation strategy. She also led a major step change in how the University worked with business, from start-ups to large corporates; launching a new innovation hub and leading a city-wide team of senior city stakeholders through the MIT Regional Entrepreneurship Acceleration Programme (REAP).

Professor Roberts is a Professor of Virology, having studied for her PhD at the BBSRC Institute for Animal Health (now the Pirbright Institute) and the University of Kent. Earlier in her career, she worked as a Product Development Manager for Procter and Gamble in the UK and Belgium.

She is a Board member of the Russell Group and of the Heart of the South West Local Enterprise Partnership and Chair of the GW4 Council.

A recording of this event is available to Women of Influence network members. If you would like to join the network, please email the EDI team.