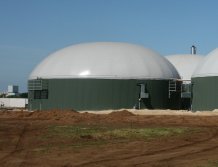 The results may have implications for biogas production

Scientists at the University of Exeter mixed together ten different methane-producing communities (populations of hundreds of microbial species, mainly bacteria).

Some of those communities were thriving when grown on their own and some were performing poorly – but when mixed together, samples containing all ten communities quickly started producing as much methane as the best of the ten.

Microbial communities, complex mixtures of species interacting with each other, are everywhere – on and in our bodies, in soil and water, even in clouds and volcanic hot-springs.

The researchers focused on microbial communities producing methane because the amount of gas produced indicates how healthy the community is. This allowed a rare insight on the mechanisms that govern the formation of such communities. The communities came from a variety of sources, including biogas plants and cow dung.

The results may have implications beyond the biogas sector, and if the same principle applies elsewhere it could be implemented in faecal transplants, or soil probiotics, increasing crop yields.

“The more communities we added to the mix, the higher the biogas yield,” said Dr Pawel Sierocinski, of the Environment and Sustainability Institute on the University of Exeter’s Penryn Campus in Cornwall.

“This shows that selection can operate on a whole community, rather than simply on single species or genes.

“We looked at the communities’ species composition after the experiment, by analysing their DNA, and saw that the mixes were very similar to the healthiest single community not only in their methane production, but also in terms of which microbes can be found in them.

“Some organisms from weaker-performing communities also became part of the thriving mix. These bacterial immigrants made the mixes have a higher biodiversity, making such communities more efficient and stable.

“There are complex feeding chains within these communities, as some microorganisms live off by-products of others. Our research shows that microbes from well-performing communities are capable of pulling their fellow bacteria with them in something we dubbed ‘bacterial nepotism’.

“We were also surprised how reproducible our findings were – our colleagues in France got the same results from totally independent tests, using a similar model.”

Dr Sierocinski added: “For the public, there are many potential practical implications if future research confirms that the same rules stand for other types of communities.

“Learning such rules that guide community behaviour allows us to harness them. For example, if our gut flora behaves in a similar way as methane-producing communities, we could use that to our benefit. We could mend the poor-performing communities by giving them a boost from the ones that function well.”

The research, funded by the Biotechnology and Biological Sciences Research Council, was carried out by the universities of Exeter and Warwick, the Earlham Institute and the French National Institute for Agricultural Research.

The paper, published in the journal Current Biology, is entitled: “A single community dominates structure and function of a mixture of multiple methanogenic communities.”