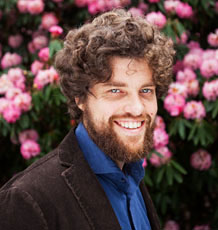 Dr Edze Westra of the Environment and Sustainability Institute

Gene editing techniques developed in the last five years could help in the battle against cancer and inherited diseases, a University of Exeter scientist says.

Dr Edze Westra said the ability to splice selected DNA into cells with great precision would become "super important" in the next two decades. There could be benefits for generations of people affected by cancer, failing vision and the diseases of old age or bad genes.

"There is always a risk with this kind of technology and fears about designer babies and we have started having discussions about that so we can understand the consequences and long-term risks,” said Dr Westra, of the Environment and Sustainability Institute on the University of Exeter’s Penryn Campus in Cornwall. "I think in the coming decades gene editing will become super important, and I think we will see it being used to cure some inherited diseases, to cure cancers, to restore sight to people by transplanting genes. I think it will definitely have massive importance."

On Tuesday, two highly influential academic bodies in the US shook up the scientific world with a report that, for the first time, acknowledged the medical potential of editing inherited genes. The National Academy of Sciences and National Academy of Medicine ruled that gene editing of the human "germline" — eggs, sperm and embryos — should not be seen as a red line in medical research.

Many critics insist that powerful new gene editing techniques should never be used to alter inherited DNA. They argue that such a move would be the start of a slippery slope leading to "designer" babies with selected features such as blue eyes, high intelligence or sporting prowess.

But the two pillars of the American scientific establishment said that with necessary safeguards, future use of germline gene editing to treat or prevent disease and disability was a "realistic possibility that deserves serious consideration".

Dr Westra is taking part in a discussion on gene editing and its potential implications for society at the American Association for the Advancement of Science (AAAS) annual meeting in Boston, Massachusetts. He said gene editing technology not only held out the promise of fixing genetic faults, but could be used to turn cells into miniature factories that churned out therapeutic chemicals or antibodies.

One application was the use of "gene drives" that increase the prevalence of a certain trait in a population. For instance, gene editing machinery placed inside the cells of large numbers of malaria transmitting mosquitoes could prevent them spreading the organism that causes the disease to humans.

The most promising form of gene editing, known as CRISPR/Cas9, was first demonstrated in 2012. It employs a defence system bacteria use to protect themselves against viruses. A carefully targeted enzyme is used as chemical "scissors" that cut through specific sections of double stranded DNA. Then the cell's own DNA repair machinery can be exploited to insert the "pasted" genetic material.

Dr Westra said: "Gene editing is causing a true revolution in science and medicine because it allows for very precise DNA surgery. "A mutation in a gene that causes disease can now be repaired using CRISPR."