Lantern slides originated in 17th century devices which came to be known as “magic lanterns.” By the late Nineteenth Century the majority of slides were presented in 3.25 inch square glass plates, projected by showmen, schoolteachers, mission leaders and many others, who might narrate the sequence of images projected.

Examples of slides include ‘The Elephant’s Revenge‘, ‘Bunyan’s Pilgrim Progress‘, ‘Alice’s Adventures in Wonderland‘ and ‘Life History of Malarial Parasites‘. All from the Royal Albert Memorial Museum, Exeter.

Professor Kember’s research in this area began with his 2009 book, Marketing Modernity: Victorian Popular Shows and Early Cinema. His research continued along with Professor John Plunkett, in an AHRC project looking at moving and projected images in the South West.

During Professor Kember’s extensive archival research it became apparent that, while the bulk of media artefacts (for example, panoramas and films) had long since disappeared, most public collections had retained glass-plate lantern slides.

Whilst most of these lantern slides were kept safe, they were often misunderstood and uncatalogued, making them largely inaccessible to the public. Some collections were tens of thousands of slides strong, but required specialist expertise to explain them to a wider public.

Professor Kember worked with heritage professionals in small and large collections, as well as scholars across the world, to revive the lantern. From 2015-18, he led the British team for a European collaborative project, ‘A Million Pictures’ and was also an Investigator in the Australian collaboration, ‘Heritage in the Limelight’ from 2016-19.

The first of these projects has led to the dramatic expansion of the ‘Lucerna’ Magic Lantern Web Resource, an open access database which has now digitised and catalogued more than 200,000 lantern slides, including over 43,000 images. Built by ‘A Million Pictures’ partner, Dr Richard Crangle, this is now the largest dedicated lantern slide database in the world, and it is hosted at Exeter.

By making these slides more accessible via digital archiving, the researchers have been able to facilitate new or improved means of disseminating both the images and information about them. This has increased the engagement of heritage institutions, general public and niche interest groups.

This research has also led to the commission and promotion of new creative performances, with commercial artists and performers enabled to reinterpret lantern slide materials in the course of their own shows, thereby further making lantern heritage accessible to diverse publics. These include the creation of a twenty first-century peep-show featuring digitised research and images, by Tony Lidington’s ‘Promenade Promotions’ group. The group have performed their show to more than 1,700 people at events such as Dartmoor Folk Festival and Devizes Street Arts Festival.

The research into these small glass slides has brought new life to the magic lantern and ensured that valuable and irreplaceable historic images will now be conserved for future generations to explore and utilise. 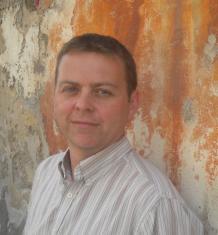 Professor in Film and Visual Culture

Joe Kember is a Professor in Film and Visual Culture. His research interests include early and silent cinema, Victorian and Edwardian popular entertainments including the magic lantern, theories of film affect, and issues concerning the representation of the human face. He teaches film, literature, and cultural theory, and has supervised postgraduate research concerning topics ranging from Victorian freak show to contemporary Scottish cinema. He is currently completing a book concerning the exhibition of popular screen entertainments, 1840-1914.