Utilising the power of the latest developments in technology, researchers at the University of Exeter have developed an app to enhance the visiting experience for tourists around several cities.

Professor Fabrizio Nevola’s research into the urban, cultural and architectural history of Early Modern Italy has led to the release of the ‘HiddenFlorence’ App.

The AR app has been downloaded 12,000 times from 40 countries and enhances the quality of experience for tourists whilst contributing to urban heritage management planning and strategy by leading tourists to less well-known parts of the city.

Recognised as an authority on the architectural and urban history of Italian cities, Nevola looked at the street as a social space, the urban iconography that binds main streets into a coherent whole. He also researched the relations between public and private self-representation, with an approach that also links the themes and issues of concern in the present to those of the past.

The app has 5 stars on the Apple store and featured on ‘Travel Man’ with Richard Ayoade and Rebel Wilson using it, with Wilson commenting “It’s kinda like playing PokemonGo but with historical sites”.

The app has successfully helped to redirect footfall around Florence. It has moved people from once overcrowded tourist hot spots to less well know areas all over the city, whilst providing a valuable tool for ‘urban storytelling’ enhancing the presence of tangible and intangible heritage and creating cultural value.

Awarded an app prize at the Conference on Cultural Heritage and New Technologies, the app has been used as inspiration for a new project, ‘Hidden Cities’, which features five new destinations. Working closely with local museums and their collections, Professor Nevola is helping bring the benefits seen from the original project and taking this forward to other cities.

The research at the University of Exeter has enhanced the quality of experience for tourists and has contributed to urban heritage management planning and strategy by leading tourists to less well-known parts of the city. The hope is that these benefits can be extended to the new cities involved with the new project using the award winning formula built the first time around.

A short promotional film describing the research aims and functionalities of the Hidden Florence app. Filmed by Freshground Films. 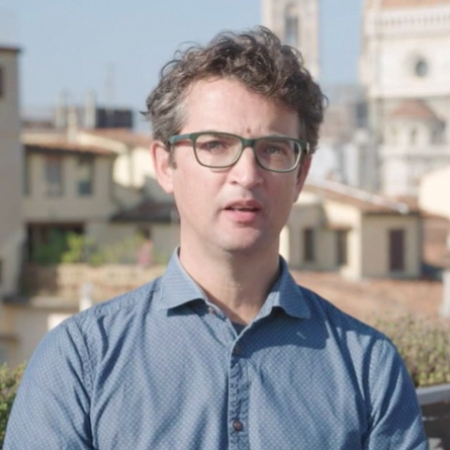 Fabrizio is lead of the HERA (Humanities in the European Research Area) Public Renaissance project, in which he is collaborating with colleagues at the universities of Valencia, Groningen, Erlangen-Nürnberg (FAU) and the Fondazione Bruno Kessler (Trento), to examine the Urban Cultures of Public Space between Early Modern Europe and the Present.