Photo by Cam James on Unsplash

This article accompanies the following Correspondence in Nature.

The UK must match claims of global environmental leadership by reversing world-leading declines in biodiversity investment.

On the 18th May, the UK government announced the intention to introduce a legally-binding target to halt species losses by 20301, a world-leading national biodiversity commitment. This follows months after an ambitious pledge to protect ’30 by 30’ (30% of land by 20302), and the release of the influential Treasury-commissioned Dasgupta Review on the Economics of Biodiversity, which argues for systemic economic changes to address contemporary biodiversity declines3. Such commitments are potentially key signals of international environmental leadership, especially important given the UK government’s role as the hosts of this year’s pivotal COP26 summit in Glasgow4.

However, in the Queen’s speech in May, the government also committed to ensuring they can be ‘held accountable for making progress on environmental issues’5. A new dataset published in Nature Ecology and Evolution exposes a gap between the rhetoric and reality6. Not only has the UK government’s funding for biodiversity fallen in absolute terms since 2008 even on the backdrop of a growing economy7; the dataset reveals the UK’s public biodiversity funding as a proportion of GDP has not kept pace with other countries across economically emerging and wealthy economies alike whose public funding has steadily increased over the same period. The UK remains the twelfth most ecologically-degraded country globally, bottom of the G7 by a wide margin8. All this, despite that the World Bank ranks the UK is the world’s sixth richest economy, and that the UK economy has grown by 11% across the same time period. The resources to invest in nature, if the government so chooses, have never been more abundant.

Seidl et al.’s work reports standardised time series of countries’ public sector biodiversity-related expenditure (e.g. spending on protected areas, agri-environment schemes) from 2008-20176. Their dataset contains the first estimates for national biodiversity expenditure for 26 countries through their participation in the UN’s BIOFIN biodiversity expenditure review, and government-reported data for a further 5 countries. The UK figures are based on government expenditure data reported by the Joint Nature Conservation Commission7. We requested and disaggregated Seidl et al.’s data by country to reveal stark trends – whilst the public biodiversity spending as a percentage of GDP reportedly rose by an estimated 104% across low-income countries and 15% across wealthy countries from 2010-2017 (we use 2010 as the baseline year as some countries changed accounting practices in the run-up to the 2010 COP), it fell by 30.5% across the same time period in the UK (Figure 1). If we include the government’s recent announcement to increase Natural England’s budget by 47%9, the UK’s spending on domestic biodiversity conservation is still approximately 20% lower than in 2008 in real terms; and this increase is partially undone by the UK government’s foreign aid cuts, some of which were invested in biodiversity conservation-related projects abroad.

Whilst a decline in biodiversity spending in absolute terms is consistent with the UK government’s austerity policy, the UK also stands out for the reduction in biodiversity spending as a percentage of its national budget - clearly demonstrating a deprioritisation of nature investment relative to other policy priorities, not just an absolute reduction. This stand-out decline persists when only comparing with other countries reporting official biodiversity expenditure statistics rather than BIOFIN survey results (Figure 1). Whilst the absolute values of national investments cannot be directly compared because of alternative accounting methods (time trends can be though as Seidl et al. standardised the data as far as possible over time), the data suggest that this is not because the UK’s funding is high in absolute terms – Seidl et al.’s data suggests the UK spent $510 million (2010 constant USD) on biodiversity in 2017, compared with $715 million (2010 constant USD) in Canada, and $2.23 billion in France (2010 constant USD, most recent datapoint 2013). 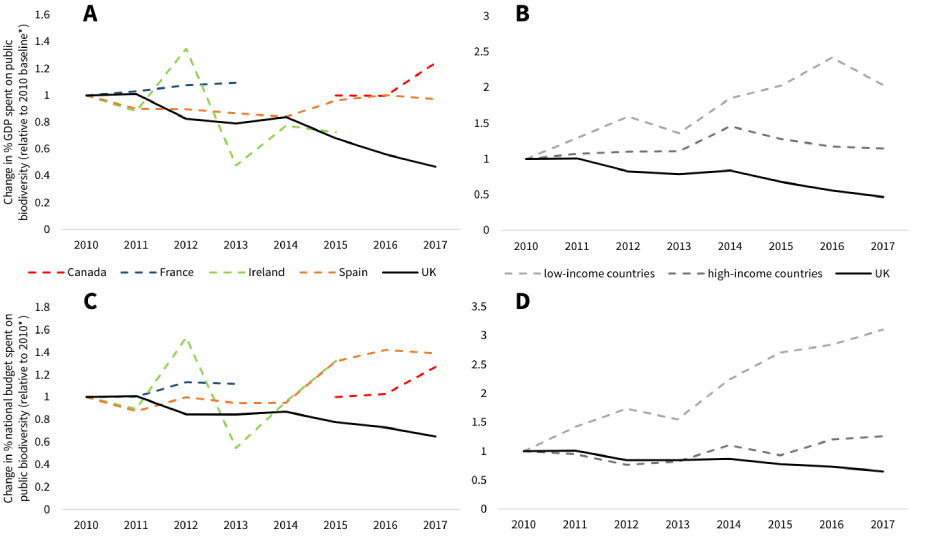 This internationally-leading decline in funding does not reflect a lack of need. According to Defra and the RSPB, the UK is on track to miss 14 to 17 of its 20 Aichi targets10,11, and it falls well behind on its 25 year Environment Plan policy commitments to restore 75% of protected sites to ‘favourable’ condition12 – current estimates suggest that this figure currently sits at 39% (for SSSIs)13.

The UK grew £250 billion per year wealthier in real terms from 2008-2018. Global environmental challenges are the most severe they have ever been. Rather than increasing their ambition in order to rise to these challenges, the UK government has chosen to shrink from them, even as Seidl et al.’s data suggests other countries’ ambition is rising, or at least constant in real terms. Seidl et al.’s new data demonstrates the stark divide between words and will; despite its supposed position of international leadership, the UK has in recent years deprioritised nature investments relative to other priorities, and is a global laggard in investing in the enhancement of the living world - a position that must be reversed if it to have any moral authority as leaders of this year’s COP26.

This article accompanies the following Correspondence in Nature. If citing this blog, please reference it as: zu Ermgassen, S.O.S.E., Bull, J.W., Groom, B. (2021) ‘UK biodiversity: close gap between reality and rhetoric’, Nature 595, 172.