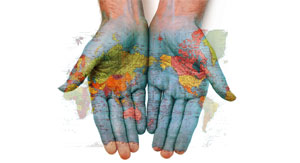 The MSc Global Governance equips you with the necessary tools to understand how key global challenges are addressed by numerous global actors and institutions in the absence of a world government. The programme is a pathway to a range of academic and non-academic careers, but is particularly suitable for individuals who hope to pursue international careers as policy makers, evidence providers, policy analysts, advisers, advocacy workers, public management consultants and administrators in the wide array of institutions that are involved in addressing global problems.

The programme combines the strengths of the Politics Department at Exeter and builds on Exeter’s tradition of offering postgraduate programmes with a strong applied bias.

You will learn to use theories and empirical research findings from the fields of international relations, public policy and politics in order to understand the role of, as well as the way in which global institutions and actors deal with global problems. The different perspectives will be put to work, illustrated and evaluated against the backdrop of crucial challenges constituting today’s global policy environment:

The programme is studied over 12 months full time, or 24 months part time. It comprises 180 credits, out of which 120 worth of credits for taught modules and 60 for the dissertation.

The modules we outline here provide examples of what you can expect to learn on this degree course based on recent academic teaching. The precise modules available to you in future years may vary depending on staff availability and research interests, new topics of study, timetabling and student demand.

Teaching takes place over the first two terms leaving the third to concentrate on your dissertation.

With the exception of the dissertation, which is a 15,000 word hands-on research project, each module on this programme is normally taught through small academic seminars expanded through seminar discussion, presentations, group work, reading and essay assignments.

Teaching is research-led, ensuring that what you learn will be cutting edge and at the heart of contemporary public debate.

Learning is student-led. In practice, this consists of two core activities:

By the end of the programme you will have acquired a series of valuable skills ranging from conducting analyses and research to presenting, debating, formulating arguments and managing groups.

The MSc in Global Governance offers high quality graduate training that combines both academic excellence and a strong applied bias. The optional modules offered in the cluster Global Governance in Practice, are being specifically designed to enhance your applied skills and help you connect with the global governance market place. All of the offered modules aim to help you develop a set of crucial personal skills which are highly valued by all employers, whether in academia or not.

As such the programme is a pathway to a range of academic and non-academic careers, but is particularly suitable for individuals who hope to work in international, national, regional and non-governmental organisations, as well as private firms that address global problems.

Students can also go on and work in government agencies such as the Ministry of Defence and Foreign Office, and the Diplomatic Service. We also expect to provide students for Civil Service Fast Stream and similar programmes.

The Exeter University careers advisory service offer expert guidance to all students and will help you plan your future through activities such as psychometric testing, employer presentations, skills events, practice job interviews and CV preparation. Visit the employment and professional development pages for more information, including podcasts and profiles, about the range of support available.

Students can take advantage of our seminar series and its long-running and highly successful annual postgraduate conference which brings together researchers from across all humanities and social sciences disciplines.

Our research is funded by leading research councils and is used by governments and networks around the world.

For admission to the programme we would normally expect that you hold a 2:1 Honours degree (or equivalent) in any subject. While we normally only accept applicants who meet this criteria, if you have a 2:2 or equivalent, are coming from a different academic background which is equivalent to degree level, or have relevant work experience, we would welcome your application.

However, the programme has been designed for students from a wide range of first degree backgrounds, enabling them to broaden their knowledge in this field. Non-standard applications will be considered on their merits and mature students are encouraged to apply.

If you are an international student, please visit our international equivalency pages to enable you to see if your existing academic qualifications meet our entry requirements.

Overall score 90 with minimum scores of 21 for writing, 21 for listening, 22 for reading and 23 for speaking.

58 with no less than 55 in all communicative skills.

Information about other acceptable tests of linguistic ability can be found on our English language requirements page.

Applicants with lower English language test scores may be able to take pre-sessional English at INTO University of Exeter prior to commencing their programme. See our English language requirements page for more information.

The funding section has information on all available Scholarships, Bursaries and Studentships open to prospective students of taught Masters programmes. You can also use the searchable database of all Scholarships and Bursaries to find funding for which you are eligible.

Fees can normally be paid by two termly instalments and may be paid online. You will also be required to pay a tuition fee deposit to secure your offer of a place, unless you qualify for exemption. For further information about paying fees see our Student Fees pages.

Postgraduate loans of up to £10,609 are now available for Masters degrees. Find out more about eligibility and how to apply.

We are delighted to offer Global Excellence Scholarships for students of outstanding academic quality applying to postgraduate Taught programmes starting in autumn 2020.
Please note that this scholarship isn't offered for all our masters programmes.

For all enquiries relating to this programme, please contact:

Where to find us

Email to a friend

Do you have a question?

This module provides you with an advanced introduction to the institutions and actors that address key global challenges in the absence of a world government. You will learn to use theories and empirical research findings from the fields of international relations, public policy and politics in order to understand the role of, as well as the way in which the most important institutions and actors deal with global problems. The different perspectives will be put to work, illustrated and evaluated against the backdrop of crucial challenges constituting today’s global policy environment: democratization; economic and financial stability; development and the fight against poverty; the environment; security. The module is suitable for non-specialist students. Yet, if you come from a non-Politics/Policy/IR background the module convenor will ask you to read a series of material selected as a “common ground” for further discussion and learning.

The module consists of an advanced introduction to the concept of global governance and two main parts. In part I you will be introduced to the main institutions and actors, active in the process of global governance. In part II the module focuses on specific global policy challenges the world is facing in a wide array of areas, ranging from democratization and human rights to economic development, health, the environment and security.